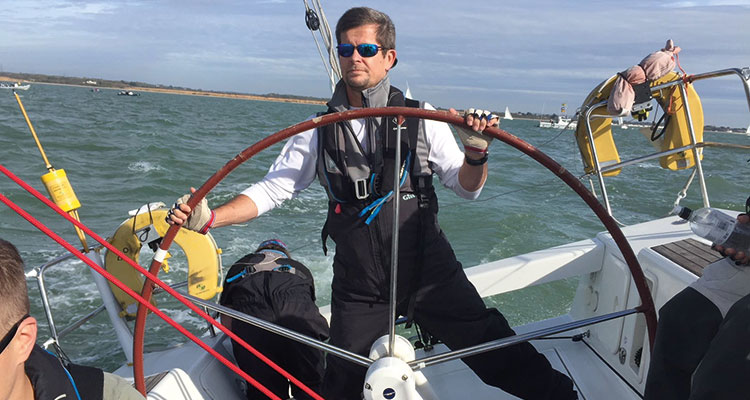 Despite some very autumnal weather, it was a very successful and enjoyable weekend. There is nothing like sailing in windy conditions to bring a team together in pretty short order!

The ten man crew, largely made up of Old Stoics but ably assisted by a few family and friends (Andrew Douglas, Anna Roberts and Perdy Light) was organised by Euan Welsh (Chandos 10), Captain of the Old Stoic Sailing Team. Our yacht for the weekend was securely and well handled by our Skipper, Charles Douglas (Temple 77), and despite the difficult conditions the crew came together to sail very well.

The crew met at Portsmouth and started with a small disaster after the much coveted Stowe pennant was blown into the Solent. However, a chilly October dip in his underwear allowed a shy Old Stoic to save the day. Once the crew had completed a night crossing to Cowes in an equinoctial gale and spent the night on board, we were a fully bonded team ready to take on the best sailors the public school sector could muster!

Saturday’s racing saw 27 yachts compete, with teams from Harrow, Roedean, Radley, Marlborough and Uppingham all taking part. Our yacht was well provisioned by the superbly organised Hannah Durden (Nugent 01) and Jonathon Hall (Bruce 79) prepped the crew with buoyant enthusiasm as we headed to the start line with a backing track from AC/DC.

Heavy winds saw the fleet racing under reefs, but there was good and close racing…with only Charterhouse having to retire after smashing bow first into a competing yacht. The team, assisted by the experience of Hattie Lewis (Nugent 10) and enthusiasm of Sam Giles (Temple 10) quickly found a good rhythm and although we weren’t troubling the top of the fleet, we were involved in some very competitive racing, with claiming water rights over Pangbourne at the upwind mark a particularly satisfying moment!

Saturday night held a dinner for all the competitors which was thoroughly enjoyable and embodied everything that is great about sailing regatta dinners.

Sunday’s racing saw heavy rain but, unlike Harrow, the Stowe boat stoically (of course) set out for three morning races and improved markedly on their results from day one. As the weather cleared, it became an almost perfect autumn day for sailing and the return jaunt across the Solent was a fantastic leg, enjoyed by all members of the team.

The Arrow Trophy has a lot to live up to next year!

Stowe finished 19th out of 27 competitors.