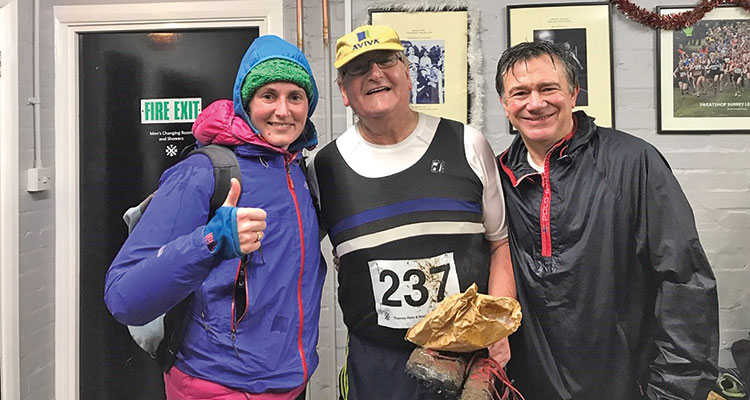 The Alumni Cross-country Race took place on 15 December on Wimbledon Common. It is a race for Old Boys and Girls teams from invited schools with a long and illustrious pedigree. Nearly 260 finishers pays tribute to splendid organisation by the Thames Hare & Hounds Club, and a terrific course.

The weather was more challenging than usual, being bitterly cold, but dry by the time the race started.  The course is a very varied one of five miles in a single lap over Wimbledon Common with its dips and twists, some track, some mud, a scenic section past the famous Windmill and the famous Butts, testing tiring legs up a steep muddy slope used originally for shooting competition and practice in the 19th Century by the National Rifle Association before they moved to Bisley.

So, what did our intrepid sextet think of it? Of those who’ve let me know, Hannah is determined to make the top 10 women again next time. That’s the sort of fighting talk we like to hear! Richard Lloyd has only done this race once before but he wasn’t put off and was pleased with his time despite not considering himself to be in great shape (goes for most participants, I guess). Somebody who insists he was in great shape was Francis Graham-Dixon who entered this race on the back of successfully completing the Centurion Grand Slam of four 100-mile trail races in five months – yes, that’s 4 x 100 miles!! No slouch, our Francis, and a role model for other Old Stoics of mature years.

The annual 4-mile race against the school will take place on Sunday 24 March 2019, a date scheduled for several OS sporting activities. It’s a pleasure to be part of such an enjoyable occasion and we’d like to exceed our best turnout to date of 10-12 runners of (very) varying ability.