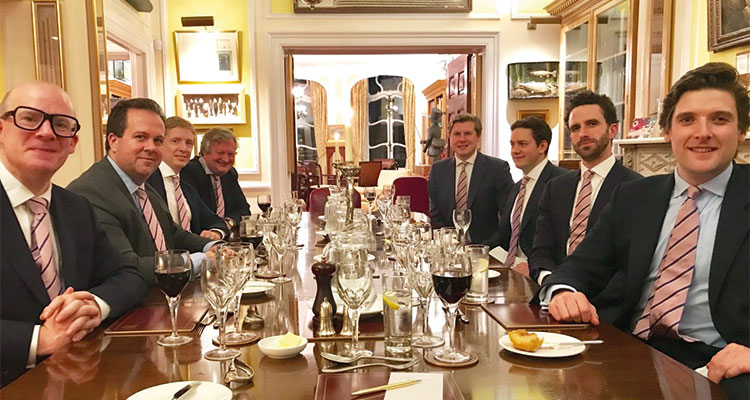 We continued to develop our relationship with the Flyfishers’ Club in London. This Club is extremely well run by Paul Varney (Chandos 77), and we now hold all of our meetings there in their private rooms. A number of members have also taken advantage of this relationship by becoming members of this internationally renowned club.

In the summer, Jimmy Lane (Walpole 95) organised a wonderful trip to the Test Side lakes in Hampshire. This saw a party of Old Stoics descend onto these peaceful and picturesque lakes next to the river Test and duly proceed to catch most of their bigger inhabitants, as illustrated in the photograph left. It was a superb day with champagne and laughter flowing in equal measure and topped off by a fantastic riverside lunch overlooking the Test, where we enjoyed the company of fellow Old Stoics and the restorative powers of chilled white wine.

Our WhatsApp group has provided many opportunities for members to engage with each other and for the banter to continue long after having left the river bank. Unfortunately for fishermen, the visual nature of WhatsApp and the many points that can be landed by displaying a fish of fine proportions somewhat limits the poetic art of the fisherman’s exaggeration! That said, this price is more than offset by the many stories and tales that are shared by members on an ongoing basis.

With the financial support and encouragement of the Old Stoic Office, the piscatorial prowess of our members was sartorially enhanced by the arrival of our club tie. The ‘Salmon Pink’, as it is affectionately named, was the combined brain child of Edward Jackson (Cobham 05), who oversaw its development and production, and Luke Wates (Walpole 90), who in a moment of inspiration came up with its colour scheme. The picture shows a number of members in the Flyfishers’ private dining room sporting the new tie.

Next season, in addition to the usual fishing that is conducted between members we have a number of exciting club
trips planned.

On Saturday 18 May we have been extremely fortunate to secure rights to fish the fantastic chalk streams that belong to the Salisbury and District Angling Club. This is likely to be dry fly fishing of the highest order and we are taking a party of six to wade and fish the clear and abundant waters of the Avon, Wylye, Nadder, Wiltshire Bourne and Ebble.

Early September will see us make a pilgrimage to the Greyhound beat of the river Test in Stockbridge. Here we will enjoy a day’s fishing and then in the evening we have arranged to have a dinner à la campagne overlooking the Test.

In late September/early October, we will follow up our May fly fishing adventures with another trip to the Salisbury and District Waters. This time we will fish dry flies and nymphs for the big Brownies and Grayling which show themselves at this time of year as they feed up in readiness for the winter.

The year will again conclude with our Annual General Meeting at the Flyfishers’ in December and much merriment that accompanies this special evening.

If you would like to find out more about the Club please contact Ian Bendell (Walpole 87) on ianbendell@hotmail.com