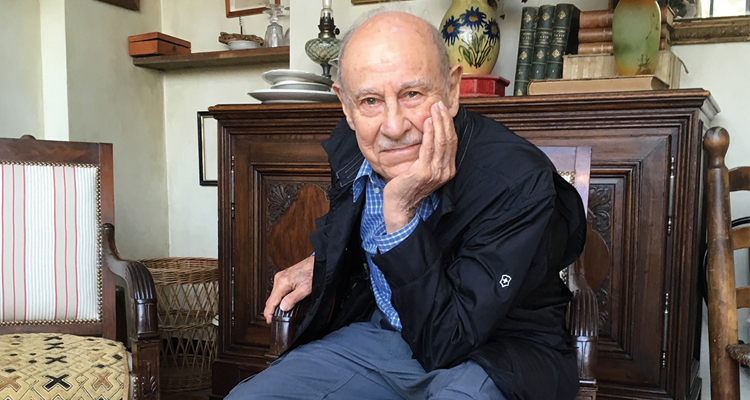 Steve was one of the Old Stoic Society’s most successful businessmen. He was born in Galatzi, Romania, just ten months after JF Roxburgh welcomed the first 99 newly enrolled Stoics on the North Front steps. Steve’s story is unique in the annals of Stowe’s history and his family’s saga tells us much about the vicissitudes and changing fortunes of people living through the maelstrom of Central and Eastern Europe in the first half of the twentieth century.

Steve’s father was Max Ausnit, Romania’s principal industrialist in the inter-war years, widely known as “Regele de Fier”, King of Steel. Max had built up a substantial steel works company, Titan Nadrag-Calan (TNC), which employed about 10,000 workers. As Romania’s fragile democracy was supplanted by a Fascist dictatorship, Max was identified as the “enemy No.1” by the Iron Guard – an anti-Semitic, anti-capitalist, ultra-nationalist movement which rose to prominence in the 1930s.

It was in this climate of political uncertainty and deepening anti-Semitism that Steve was sent to the relative safety of Britain, where he spent two years as a pupil at St Bede’s Prep School, before arriving at Stowe, where he threw himself into all aspects of school life and thrived as a member of Cobham House. Steve passed the Oxford and Cambridge Board School Certificate Examinations with flying colours and Roxburgh confidently predicted that Steve would secure a place at “a good Oxford or Cambridge College”.

However, disaster struck in early 1940 when Steve’s father became the victim of a conspiracy hatched by jealous business rivals who falsely accused him of fraud and infringement of Romania’s strict currency laws. These bogus allegations were supported by the corrupt, greedy and cynical Romanian monarch, King Carol II. After a deeply flawed trial in which Max Ausnit refused to transfer ownership of his companies to the King’s personal holdings, Ausnit was sentenced to six years’ penal servitude in the notoriously harsh Jilava prison and ordered to return currency amounting to nearly £140,000 to the Resita Steel Works. Shortly afterwards, King Carol II was forced to abdicate in favour of his son, King Michael. The new administration was a military dictatorship led by Marshal Antonescu. At first, Max’s situation improved and he was held in a sanatorium and then under house arrest. However, the deeply anti-Semitic Antonescu was just as determined to continue with the expropriation of Ausnit’s wealth and Max had been warned by Air Vice-Marshal DF Stevenson and General CVR Schuyler, respectively the British and American representatives of the Allied Control Commission in Romania, that his life was in danger. Max left the country for good, travelling first to Paris and then to New York where he took up American citizenship. A year later, the Romanian Communist Government confiscated Ausnit’s properties and condemned him to death. Not guilty of any crime, Max Ausnit therefore found himself condemned to death by the Nazis and Communists, two of the most despotic regimes of the 20th century.

While his father was battling with false imprisonment and persecution at the hands of the Antonescu regime, Steve left Stowe in April 1941, shortly after his 17th birthday. He made his way to America to join his uncle Edgar. He had been accepted by Harvard where he studied Engineering and took part in university sports, captaining the Crimson Rugby team.

After an accelerated undergraduate course which took two and a half years instead of four, Steve was conscripted into the US Army and was assigned to the Engineering Corps, eventually becoming a very effective Drill Sergeant.

In 1951 Steve, working with his father and uncle, Max and Edgar Ausnit, developed the deceptively simple plastic zip fastener which has become indispensable for re-closable bags sealing everything from sandwiches and snacks to essential toiletries which pass through airport scanners. Steve’s company, Minigrip Inc., has been working on variations of fasteners for many years, but his big breakthrough came in 1964 when the Dow Chemical Company negotiated an exclusive licence from Minigrip Inc. to produce and supply bags to supermarkets across America under the trademark of Ziplok.

Steve held 104 patents for re-closable fasteners and zipper bags; he was co-inventor of 61 other patents and invested in businesses around the world. In 2015, Steve was presented with the keys to the town of Lugoj in Romania for supporting local businesses and schools while also sponsoring sporting events such as the Max Ausnit Cup for Cycling.

Steve was also recognised for his work with the Memorial Library in New York to promote a better understanding of the Holocaust through conferences in Romania: in July 2015 he took part in “the Holocaust in Romania: Between History and Perception” which brought experts from America and Europe to take part in a four day seminar held in Lugoj.