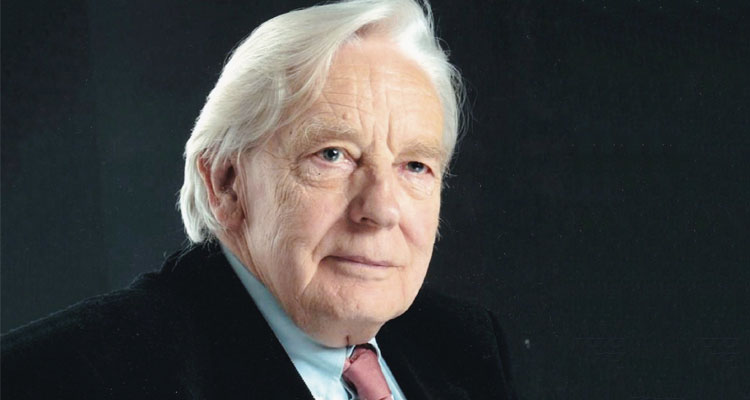 Peter Lewis, who died in March 2016, had a long and distinguished career as a freelance journalist, literary critic and author. Born in 1928 and, on leaving Stowe following National Service, he won a scholarship to Wadham College, Oxford.

He launched his career in journalism by working for provincial newspapers before joining the Daily Express as a sub-editor and shortly after, moved to the Daily Mail where his assignments were varied. It was there that, for many decades, he excelled as a reporter, feature writer, award winning foreign correspondent, star interviewer, theatre critic, literary editor and book reviewer. In the 1960s, he wrote comedy sketches for the satirical show That Was The Week That Was, The Two Ronnies, Marty Feldman and an original TV series That’s Your Funeral and also created the character, Byron, for Michael Crawford.

He also wrote books and published social histories of life during the Second World War and the 1950s, as well as a documented life of George Orwell, the rise of the National Theatre and The Prospect Theatre Company where Toby Robertson (Bruce 47), a contemporary at Stowe, was Artistic Director.

In 2013, his autobiographical memoir, A Rogues Gallery sub-titled Off-The-Record Encounters with Figures of Fame, Folly and Fun was published. This charted a journey through the past half-century covering a wide variety of stories and events, anecdotes of leading writers, thinkers, politicians and gurus, he had known and interviewed over the years including the great British actors of his age. This captured the world that he inhabited and reflected the breadth of his talent.

During the latter part of his life, he returned to Buckinghamshire and lived in a cottage in Haddenham, where he developed and loved his cottage garden. From there, he visited Stowe on several occasions. He had a lifelong love of music, played the piano and was a keen artist. His love of the latter he always attributed to the inspiration of Robin Watt, art master at Stowe during his time there.

But, first and foremost, he was a newspaper man and represented the best of journalism, searching, critical, independent but with a passion to explain clearly. Recently described in Tony Rennell’s obituary as a true renaissance man of Fleet Street, he said that Lewis’ book reviews, which enriched the Mail’s book pages for many years, were “masterpieces of concision, depth and wit”. The compulsion to write pursued him throughout his life and he once wrote, “For those who suffer from it, the compulsion to write is a mystery, doing it is a misery, but not doing it is worse”. His overwhelming curiosity and enquiring mind made sure he was never without a subject.