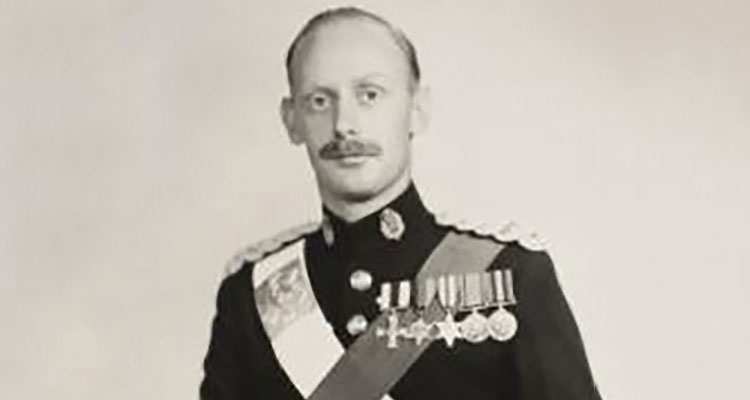 In August 1944, Robin was in command of a platoon of the 2nd Battalion The Queen’s Own Cameron Highlanders (2 QOCH). The Battalion had orders to seize and hold a high ridge overlooking the River Arno, running north-east from Monte Ferrato to Póggio Pianale. This feature dominated the surrounding country and was held in strength by the Germans.

On the morning of August 5, one company at Póggio del Grillo, halfway along the ridge, was attacked by a large enemy force and overrun. ‘C’ Company was ordered to recapture the position and Robin was given an objective on the left-hand side.

He led his men in silence and complete darkness and moved with such skill that he had overrun three enemy positions before they realised what was happening.

Despite coming under continuous small arms and mortar fire, he moved among his men, directing and encouraging them until he could withdraw them to a better position. Robin was awarded an Immediate MC. The citation paid tribute to his resourcefulness, courage and skill.

In November 1942, he was commissioned into QOCH and was posted to the 2nd Bn. He served in the Shetland Islands before moving to Italy in late 1943 and taking part in fierce fighting at Monte Cassino, where he was wounded by a rifle grenade. After recovering from his wounds, he rejoined his unit on the Adriatic front and subsequently fought in the battles to break through the heavily defended Gothic Line.

After retiring from the Army in 1967, he and his family emigrated to New Zealand. He purchased an apple orchard at Matahua, near Nelson, which he managed until 2001. Robin married Jill Fitzgerald in 1957. She survives him with their two sons and a daughter.