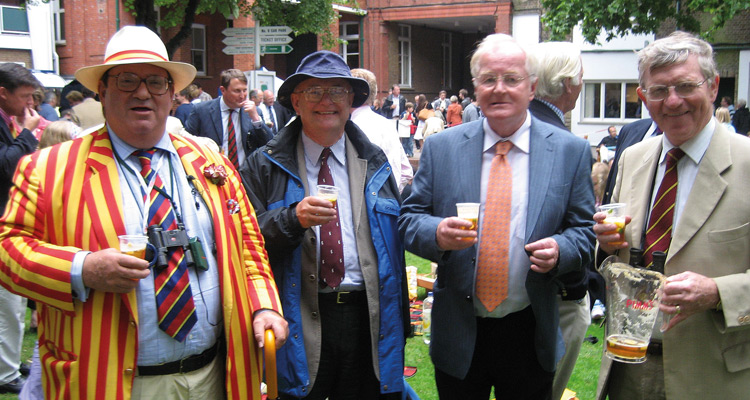 Nick and I arrived at Stowe on the same day in January 1962, were in the same House (Chatham), started in the same class (3B) and became each other’s lifelong, and, dare I say it, best and closest friend.

Although several hundred miles separated us after our Stowe days, Nick being a northerner to his toenails, and me a (he would claim ‘soft’) southerner to mine, we often travelled to each other’s homes, for celebrations, ‘catching-up’ sessions, me attending his presidential oration at the Northern branch of the RICS during his presidential year and several unforgettable New Year’s Eves; him to the south for client commitments, lunches, dinners or even the odd game of snooker.

Stowe memories included when Nick was a House Monitor and I [decidedly] wasn’t, Chatham, under my command, won the CCF Coldstream Cup for the first time in living memory (mainly, I claimed, because of my brilliant drilling of our contingent), and I insisted that he should award me my House Colours for Corps – probably never known before (or maybe since)!

Our lifelong rivalry about our respective cricket counties (Yorkshire, then Durham, in his case and Middlesex in mine), always provided material for much competitive banter, and I even managed to lure him to Lord’s occasionally. The photograph shows us both at Lord’s around 12 years ago at the Friends’ Provident Trophy Final when ‘his’ Durham thrashed Hampshire.

Nick was one of life’s great characters, and a true friend to me and, no doubt, to his lovely and loving family, and to so many others. I am very saddened that, at only 4 months older than me, he has now moved on to carry out his future surveying in the heavenly Elysian Fields.

In his professional life, Nick built a solid reputation locally and nationally over 45 years as a highly competent self-employed Chartered Surveyor. His clients ranged from scrap dealers in dispute with their local authority to foreign investors in the Swan Hunter Shipyard on Tyneside, which Nick valued for them in a high profile sale; and even valuing property in Spain for the artist Salvador Dali. He never discriminated in choosing who to act for.

For many years he was the Conservative agent for his native Sedgefield constituency, never giving up hope that the sitting MP (Tony Blair) would be unseated. How ironic that, shortly after his death, this former Labour bastion finally turned Conservative, and how sad that Nick was no longer able to witness it.

He will be sorely missed by his large extended family, friends, associates and clients, many of whom became firm friends. We shall miss you Nick. Godspeed on your latest journey!