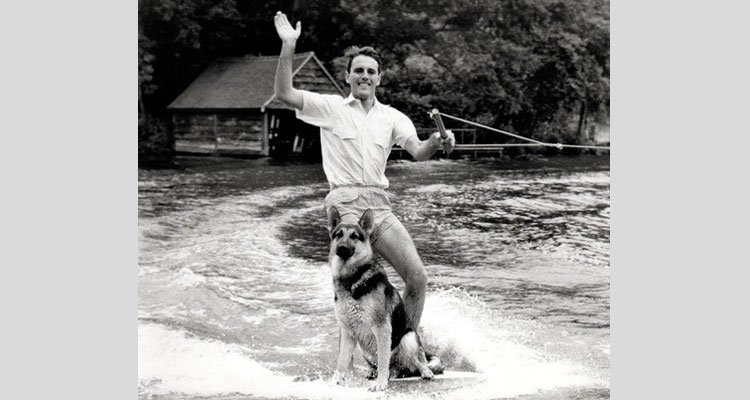 Michael Colston measured his multi-faceted life as a businessman, entrepreneur, farmer, landowner, naturalist, conservationist, sportsman, photographer and traveller by the exacting standards that he set himself and expected from others. Yet he always judged people, whatever their station, on their personal merits tempering his expectations with wry wit and lack of pomposity.

In 1939, Michael was evacuated to Canada to attend Ridley College, Niagara Falls. On returning to England in 1945, his father was determined that he should go to Stowe. During their joint interview, JF made it clear that he would not take Michael “until he gets rid of that appalling colonial twang”. Michael duly obliged and became a School Prefect, Head of Grenville and the CCF’s under-officer. Commissioned into the 17/21 Lancers for his National Service, he was posted to serve with the 1st Royal Tank Regiment in Korea where he drove Centurion tanks on the front line. Emerging unscathed, he went up to Caius College, Cambridge in 1954 to read Economics, but decided that academic theory was no substitute for the real thing and left.

After Cambridge, he joined his father’s company Colston Appliances Ltd before establishing Charles Colston Group Ltd which, through Tallent Engineering Ltd, expanded its manufacturing base to include products for IBM, Ford, Jaguar Land Rover and Nissan as well as Black & Decker’s Workmate Bench and Minibrix. When it emerged that Zanussi and Indesit were being directly subsidised by the Italian government in blatant defiance of EU rules, Michael, then Chairman of the British Association of Manufacturers of Domestic & Electrical Appliances (representing all the major British firms in that industry), arranged for a personal meeting with Prime Minister James Callaghan. After quoting verbatim a letter from Emilio Zanussi, who flatly denied that his company was being subsidised, Callaghan dismissed Michael’s representations. Michael’s parting shot to the PM was that the Italian companies would inevitably go bust once their subsidies were withdrawn. Sure enough, in 1984 Zanussi was bought by Electrolux and in 1987 Indesit by Merloni.

This meeting convinced Michael that it was time to sell the Colston manufacturing company and move on. He transferred his focus to farming, forestry and the management of Ewelme Park, which soon became a byword for efficient and sympathetic estate management and conservation.

Michael, an occasional sailor and keen tennis-player, had been a committed field-sportsman from boyhood. A regular at some of the country’s grandest shoots, he also rented fishing beats on both the Dee and Loddon. His aversion to smoking resulted in his founding QUIT. Yet his greatest passion for was wildlife conservation, whether as adviser to the Hawk & Owl Trust or as a talented photographer who, in the course of seventeen world-wide safaris, meticulously chronicled his perilously close encounters with polar bears in Svalbard, gorillas in Rwanda and orangutans in Borneo.

Michael married first Jane Kilham Roberts. Their three daughters Katrina, Quita (one of Stowe’s first female intake) and Melissa all survive him. Secondly, to Judy Briggs who shared many of his safari adventures. No one who had the privilege of knowing Michael will ever forget him.