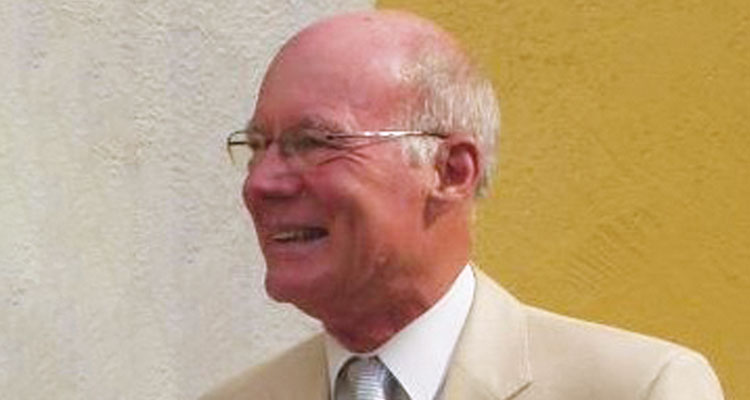 Julian Dana Nimmo Hartland-Swann was a career diplomat, notably serving as Her Majesty’s Ambassador to Mongolia (1977-79) and Myanmar, formerly known as Burma (1990-95).

He was the elder son of Professor Joseph John (“Robin”) Hartland-Swann, one of the ‘First Ninety-Nine’ boys to attend Stowe at its foundation in 1923. His mother, Kenlis Taylour, was descended from the Earls of Bective, later Marquesses of Headfort, in Eire. His younger brother Jocelyn and two of Julian’s uncles also attended Stowe: his uncle Conrad Harry (“Billy”) is commemorated in one of the stalls in Stowe Chapel.

In his spare time, Julian was a keen yachtsman, owning a 28-foot Etap sailing boat. He adored Baroque music, opera and theatre, oysters and, perhaps most of all, restoring picturesque ruins. In 1973, he purchased a ruined cottage in north-east Corsica, which he and his family gradually rebuilt with their own hands over the course of the next six years. In 1979, a group of Corsican nationalists planted a bomb which blew out the roof and all the windows. Undeterred, Julian and his family restored the house once more, only for a further bombing raid in 1981 by the Corsican nationalists – aided this time by an IRA sympathiser on a British Council grant to study at University of Corsica – completely destroying the building, reducing it to a pile of rubble. With admirable sang-froid, Julian decided instead to restore a nearby 16th Century Pisan fortress with metre-thick stone walls and no windows on the ground floor. Restoration of the three-storey keep and adjacent ruins took another 19 years of family toil, this time with some professional assistance. The fortifications have since successfully withstood another bombing raid.

After spending his early years mainly in Egypt and South Africa, Julian attended Cheam School and then Stowe, where he became Head Boy and won a scholarship to Lincoln College Oxford. He carried out his two-year National Service in Malaya, fortuitously close to his family who were then living in Singapore. During his time at Oxford (1957-60), he gained an Honours Degree in History and was awarded a Half Blue in Swimming.

In 1960 Julian married Ann Green, a fellow Oxford undergraduate who died in 2000. In 2004 he married Julie Ryan. He died after a long illness, aged 84. Although he had been suffering from Alzheimer’s Disease for some time, the lockdown of his care home in Brussels due to Covid-19 and the consequent barring of all visitors undoubtedly hastened his end.

He is survived by a son Piers and a daughter Justina from his first marriage, and by his second wife Julie, her son Erik and daughter Emilie.