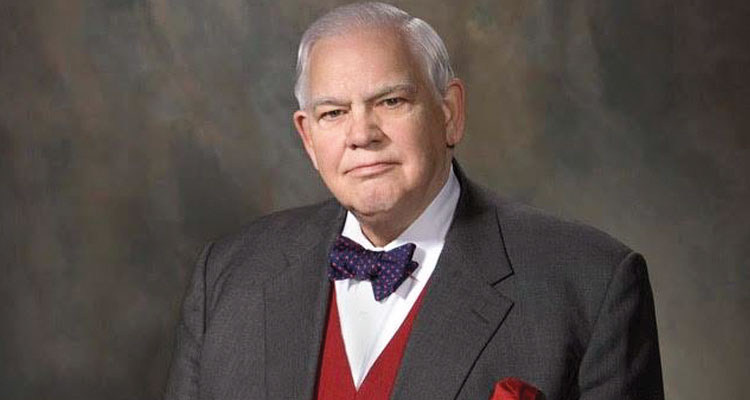 James Calhoun Humes, a former speechwriter in the Nixon White House as well as a speechwriter for Presidents Eisenhower, Ford, Reagan and George H.W. Bush, and the author of more than 30 books, died on August 21 at Chestnut Hill Hospital, Philadelphia of a heart infection. He was 85 and a long-time resident of Philadelphia.

In an era before the internet, Mr Humes’s encyclopaedic knowledge of American history and his meticulously indexed collection of historical quotes and anecdotes, which he maintained in loose-leaf three ring binders, attracted the notice of the Nixon campaign in 1968, following his entry into Pennsylvania Republican politics representing his native Lycoming County in the Pennsylvania Legislature.

As a law student at George Washington University, he had previously written speeches for President Eisenhower while his wife Dianne worked on the staff of Vice President Richard M Nixon. On the White House speechwriting staff of President Nixon, Humes specialised in ceremonial remarks and toasts, which he self-deprecatingly referred to as “Oval Office offal” or “Rose Garden rubbish” (a term invented by his predecessor, LBJ speechwriter Peter Benchley – who left the Johnson White House to pen the best-selling novel Jaws).

Humes also embraced the role of speechwriter as “translator,” transforming bureaucratic policy into something more poetic. One of the highlights of his service in the Nixon White House was when the President asked him to draft the inscription on the plaque to be left on the moon by the astronauts on the Apollo XI mission in 1969: “Here men from the planet Earth first set foot upon the Moon July 1969, A.D. We came in peace for all mankind.” The first draft, “Just as Man Explores Space, Hope Unites Man Exalting Science” (an acrostic for his name) was summarily sent back with a red line drawn through it.

Born on 31 October 1934 in Williamsport, PA to Judge Samuel Hamilton Humes and his wife the former Elinor Graham, Humes attended public schools in Williamsport before following in the footsteps of his father and grandfather and joining his two older brothers, Graham and Sam, at the Hill School, Pottstown, PA, from which he graduated in 1952. In his last year at Hill, he won an English-Speaking Union scholarship to Stowe, where he studied during 1952-53, the year of Queen Elizabeth’s coronation.

As an ESU scholar during the coronation year, Humes participated in many special events, at which, among others, he met Prince Philip, Duke of Edinburgh and danced with the Queen at the 21st birthday party of her cousin Princess Alexandra. He also met Winston Churchill, then in his second term as Prime Minister. Churchill’s words to Humes that day, “Young man, study history. In history lie all the secrets of statecraft,” prompted him that very day to take down the poster of baseball player Ted Williams from his dorm room wall, replacing it with a photo of Churchill. Churchill would become a role model, and his admiration of that 20th Century statesman inspired him to write several books, including Churchill: Speaker of the Century (1980) which was nominated for a Pulitzer Prize.

Humes’s time at Stowe resulted in many lifelong friends, whom he continued to visit annually until 2015. As he later recalled, his year in England resulted in a “severe case of Anglophilia,” which he continued to express through his lifetime involvement in the English-Speaking Union. In 1994, the British Government awarded him an MBE in recognition of his service to Anglo-American relations.

Following Stowe, he again joined his brothers at Williams College, Williamstown, MA as a member of the Class of 1957. Also, in 1957, he married the former Dianne Stuart of Concord, MA, then a US Foreign Service Officer in the US Consulate in Naples, in a ceremony at Holyrood Chapel, Edinburgh. The couple returned to the United States to live in Washington, DC, where Humes attended George Washington University Law School, working as a part-time speechwriter for President Eisenhower while Dianne worked on the staff of Vice President Nixon.

Following a term in the Pennsylvania Legislature from 1962-64, Humes and his wife settled in Philadelphia, where he was Executive Director of the Philadelphia Bar Association from 1967 until 1969. In 1969, Mr and Mrs Humes moved to Washington DC to take up positions in the Nixon White House. Humes served as Assistant to the President, while Dianne was on the Presidential Commendations staff. Following a stint in the State Department, Humes returned to Philadelphia in 1973 to focus on his writing, returning briefly to Washington as a consultant to President Ford from 1976-77 and to take up a Woodrow Wilson Fellowship at the Smithsonian from 1982-83.

From 1985 to 1999 he was adjunct professor of communications at the Fels School of the University of Pennsylvania. In 1999, he moved to Pueblo, Colorado to take up a post as Jarvis Ryalls Professor of Language and Leadership at the University of Southern Colorado, which he held until 2004.

He also was a visiting fellow at the University of Denver. In 2012, in commemoration of the 40th anniversary of President Nixon’s ground-breaking trip to China, Mr and Mrs Humes accompanied President Nixon’s brother Ed on a trip to China that re-created the original 1972 itinerary. In 2017, he and his wife returned to Philadelphia where they settled in Cathedral Village.

Recently reflecting on his varied career, he recalled that one of the most difficult speeches he was ever called upon to write was a eulogy – when its subject had not yet died. In March 1969, former President Eisenhower lay in Walter Reed Hospital with his family gathered around him. Ray Price, Nixon’s head speechwriter, asked Humes to assist him with the eulogy as Humes was a friend of the Eisenhower family. Humes drafted the eulogy from the hospital in consultation with Eisenhower’s son Col. John Eisenhower. The eulogy incorporated Eisenhower’s deathbed words, “Tell them all …I always loved my wife, I always loved my family, I always loved my country,” sentiments which Humes also shared.