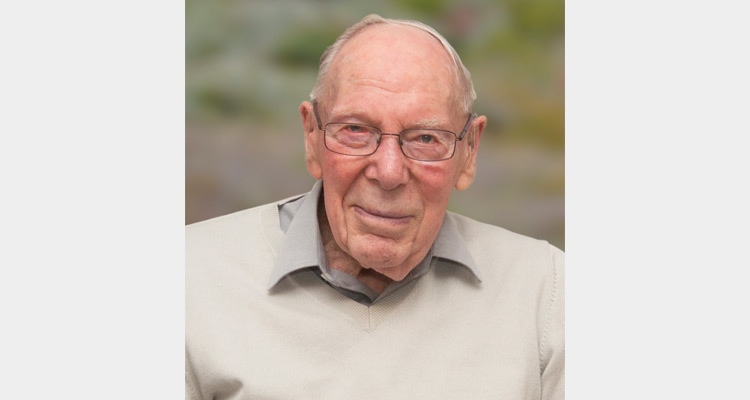 Jos Penrose on his 100th birthday

Joscelyn (Jos) was an orthopaedic surgeon for some 37 years, progressing from his first post as a clinical assistant/house surgeon at St Thomas’s Hospital, London, in 1939 to his retirement as Senior Consultant Orthopaedic Surgeon to the Coventry and Warwickshire group of hospitals, in 1976.

Right up to his death at the age of 103, Jos very much enjoyed the fact that he had been retired for 6 years longer than he had worked!

Born in Banbury, Oxfordshire, where his father was a family GP for over 30 years, it was logical that Jos would take up a medical career. After four years at St Ronan’s Preparatory School in West Worthing, he attended Stowe from 1929-1933, under the headship of JF Roxburgh, for whom he had the greatest admiration. Jos described his academic career at Stowe as, “not particularly brilliant”, although his handicraft talents became apparent when he built himself a punt, for fishing in the 11-Acre Lake.

War broke out almost as soon as Jos had started his first medical position as a clinical assistant/house surgeon at St Thomas’s Hospital, London. He was posted to Botleys Park Emergency Medical Service Hospital in Surrey where he was part of the skeleton crew who set up the emergency surgery unit with little or no resources. So, Jos found himself making a lot of equipment, including an operating table built from scrap wood!

At Botley’s Park, Jos met Katherine (‘Kay’) Forsyth, a physiotherapist from Cape Town and daughter of a Scottish-born architect who had emigrated to South Africa. After knowing each other for a year or so they were married in 1940 at the height of the Battle of Britain. Kay had come to the UK in 1939 to train as a physiotherapist but when war broke out she was unable to go back to Cape Town and her parents were unable to visit her. In fact, Jos and Kay had been married and had three children before Kay’s parents met her husband in 1949.

After his medical service at Botley’s Park, treating wounded servicemen and wounded civilians evacuated from the Blitz in London, Jos was called up in 1943 for service in the Royal Army Medical Corps, with the rank of 2nd Lieutenant. In 1947, shortly after achieving his Fellowship of the Royal College of Surgeons, he was posted to the British Army of the Rhine in Hamburg, as the only orthopaedic specialist in the British sector. He was demobbed in 1947, with the rank of Major.

Jos’s post-war career took him from an appointment as Postgraduate Registrar at the Wingfield Morris Orthopaedic Hospital, Oxford, to Registrar and Tutor in Orthopaedics at the Bristol Royal Infirmary. In 1950, he achieved the position of Consultant Orthopaedic Surgeon to the Coventry and Warwickshire group of hospitals – a post he held until his retirement in 1976.