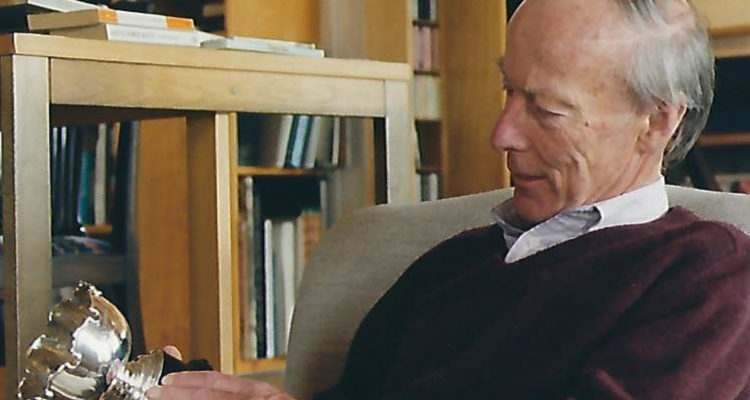 Ian was born in 1933 in Cheltenham, England to Scottish parents. He had two elder brothers, the eldest of which was killed in action whist serving in the RAF.

The family moved back to Edinburgh during the war, his parents’ house afforded views across the Firth of Forth to the Rosyth naval base and nearby warship anchorage. Ian and his brothers devised and played complex naval games involving maps and model ships (made from the metal from toothpaste tubes).

Ian joined Stowe in 1946, having previously attended Prep School. His favourite subjects were Geography and History and prospered in the Art School. Although I am not aware of him having any formal training in art, even at 14 he had excellent skills in drawing and painting. Ian always claimed his art teachers at Stowe were his only art training.  He had high regard for the training he received there.

In 1948, Ian left Stowe to travel to Cape Town to where his parents had moved. The journey comprised flying, boats and overnight hotel stops and took at least three days. I’m sure this early influence led to his later book on these machines.

Whilst in South Africa, Ian qualified as an Architect at the University of Cape Town before training to work in Kenya for Richard Hughes. In 1955 he returned to Britain after a continental tour and took a job on an architectural journal.

Ian moved to Philadelphia in 1960 to study at UPenn under eminent architect Louis Khan. At the same time, he did a planning degree under David Crane. After graduating, Ian joined a team who were going to do urban design work in Venezuela and in Chicago, but the project was derailed and they ended up going to work for the Boston Redevelopment Authority. In Boston he met his future wife Jean Carol MacCarthy, Bostonian, mathematician and city planner, who had studied at MIT. They married and in 1962, they returned to Kenya.

A year later they moved to Edinburgh to help start up the first school of architecture at Edinburgh University at the same time as practising as an architect for Ian Lindsay and Partners. Ian designed and built his own house in Scotland had they had two daughters, the first in 1965 and the second in 1967. In 1969, having moved back to Philadelphia, they had a son and renovated an old house in Mount Eyrie.

The Dalgleish Lindsay group was set up in 1973 after Ian and his family moved to Athens. This international partnership was in collaboration with his brother Robert and planner Craig-Mcfeely in the Nairobi office, Stuart Neil in the Lusaka office and connected with the Edinburgh office of Ian Lindsay.  The work was primarily hospitality buildings, in Spain, Cyprus, the Middle-East and Africa.

Ian was a front-runner in the early days of eco-tourism, ecological design and climatic-responsive design.  Together with Jean, they undertook planning work in Africa. During rough times for the office, with political unrest in much of the work areas, Ian painted – mostly landscapes and buildings. He had several exhibitions and developed a select set of art clients. His art work is what paid for the children’s school fees!

In 1977, the family moved to Gaborone in Botswana where the office was set up to undertake a large planning job. During their years in Botswana, he continued with his hospitality work, built several hospitals, schools and university buildings and important government buildings including the ministry of Finance and the national police headquarters.  After several years of drought, Ian started painting watercolours of ships.  His first exhibition, in London, came as he was consulting for the FAO, travelling between Botswana, Bangladesh, the Caribbean and London.

Ian became an American Citizen after they moved to Southwest Harbour in Maine. He designed and built his own house and, in addition to some architectural work, took up maritime painting (principally 19th and early 20th century maritime history) as his main occupation. Ian retained a gallery in London as well as in Connecticut. 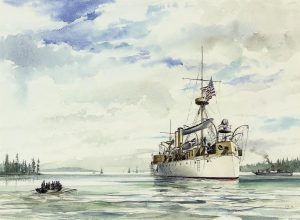 His maritime art is featured in multiple museum collections including Greenwich Maritime Museum and Mystic Maritime Museum among others. Ian wrote seven books; British Capital Ships, Armoured Ships, Ironclads and Paddlers, Passage East, Flying Boats, Cruisers and La Guerre de Course, all featuring some of his over 500 paintings. He had a final book in preparation to be published posthumously.

In 2011, Ian built a new house called Rocky Brae for himself and his wife in Freedom, New Hampshire. He continued to travel, including family visits to his children (and grandchildren) in Texas, London and Florida. His last major trip was to Britain and then Venice before he passed away in December 2016.