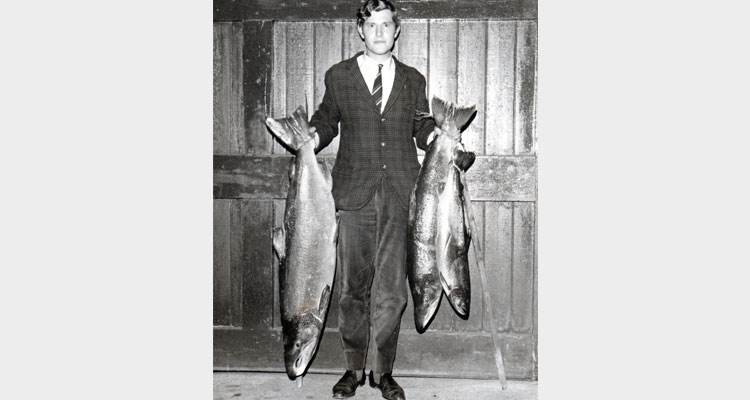 Here is an excerpt (a true story!) featuring Hartley from my book: 100 True or False Fishing Stories.

I was at school with Hartley but didn’t know him well and then found he was to be a fishing guest at Dunkeld House, our Hotel in Perthshire, in our very first year in 1969. He was a nice chap, a gentleman, always polite and friendly and he loved to fish.

On the penultimate day of the 1971 season, some friends and I were out in the boat and we harled down past Hartley, who was fishing from a bank, and exchanged a few words with him before continuing. We were blethering away to each other when we realised Hartley was trying to attract our attention, so we reeled our rods in and set off up the river.

I could see Hartley’s rod was bent well over. “This is a pig!” he exclaimed, apparently having seen the fish roll over. “I put a new 12 pound line on, but I can’t do a thing with it.”

We struggled for 45 minutes, trying with a gaff without success until finally, in the darkness, I was in the river up to my chest without waders on and those on the bank trying to guide me to the fish, when it suddenly slipped down right under the nearest arch of the bridge into the really fast water. We were about to lose it. Then everyone behind me shouted that it was between me and them!

I turned and could just see a big, black back and dorsal fin sailing past me, stuck the gaff into it and made for the bank. Once there the others hauled the fish out and dispatched it.

Hartley was ecstatic as the odds had been against him all the way. It weighed thirty-six pounds and took Hartley over an hour and a half to land.

Hartley was also a passionate game shooter as well as a salmon fisherman and we had a mutual interest in both sports. I remember a cheery, friendly person who would do no harm to anyone and who kindly secured for me the last Silex Superba salmon reel made by Hardy Brothers of Alnwick. A great Old Stoic.

The picture shows Hartley with his 36lb Atlantic salmon, along with two others of 25lbs and 9lbs that he caught the following day, the final day of the 1971 season on the Tay.