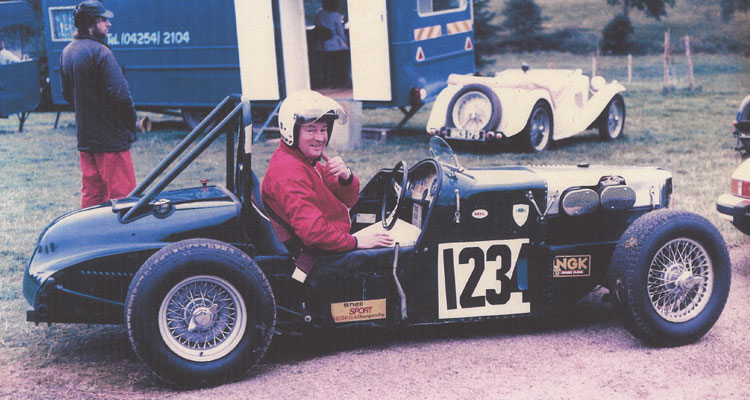 David died peacefully on 20 November 2017, aged 88. Adored husband of Jane, loving father of the late Nick and of Sophie. A proud grandfather of Thom, James, George, Olivia and Izzy and special great grandfather of Jackson and Sadie. David was a very loyal Old Stoic and visited Stowe regularly. Before he died, he supplied two articles for this magazine, both of which are detailed below for his friends to enjoy. David will be sadly missed by all.

I have had a lifetime of enthusiasm for MG cars, since my 18th birthday in 1948, on which I was given, by my father, a classic MG C-Type (750cc supercharged) which had won the Double Twelver race at Brooklands in 1934, driven by the Earl of March.

Subsequently, I have owned six other MGs, including the Kayne Special illustrated here. I have entered many hill climbs, sprints and club races up and down the country.

Also, I ran my highly modified A Type at the 2005 Le Mans race in France. I have also been a loyal and active member of the MG Car Club in Abingdon for many years.

My time as High Sheriff

One Saturday morning in April 1996, I answered the telephone from someone I had never heard of. “Is that David Elliot?” he asked. “It is,” I answered.

“Well”, he said “Would you like to be installed as High Sheriff of Staffordshire in the year 2000?” I was completely amazed and asked him what it entailed. “Do you or don’t you, want to be High Sheriff” He insisted. “Fine” I said, “what happens now?”

The Office of the High Sheriff stretches back over a thousand years, and is the oldest and longest continuous secular office under the crown. My year consisted of over two hundred events in the county and UK, mainly connected to legal matters in Courts, and looking after the visiting High Court Judges from London.