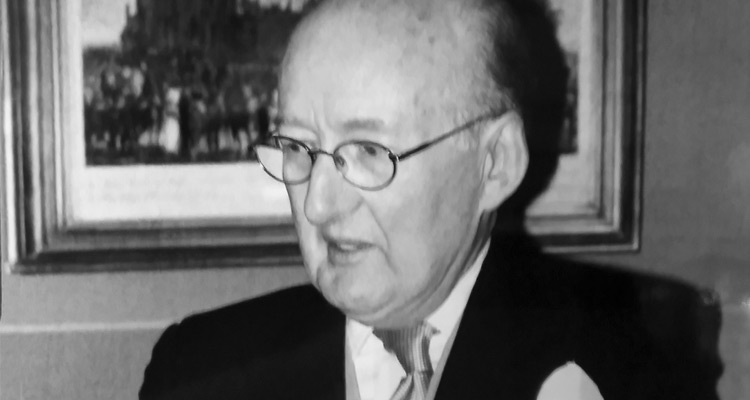 Colin used to say his single real achievement as a boy at Stowe was to persuade his Housemaster to rescue six old portraits, which had been abandoned in the attics, and bring them down to hang on the Grenville staircase. He would say this in a self-depreciating manner, which was characteristic, but the remark itself was to be doubly relevant and true later in Colin’s life.

In the sixth form Colin was on the History Side and never forgot the kindness of his Tutor, Bill McElwee and his wife, Patience, who guided him through his final Stowe years. Later, for many years, Colin was to be a judge for the McElwee Travel Scholarships. However, his interest was in art, not academic scholarship, and following National Service he chose to go to the Slade, not a university, and after four years there he entered an administrative career in Culture and the Fine Arts. For eleven years he worked with the Arts Council in Manchester, where LS Lowry was among his friends. For the next three years he was in the Picture Department of Christie’s in London, before joining David Carritt at Artemis Fine Arts in Duke Street, where he became a Director and stayed until his retirement. He was also Chairman of the Villiers David Foundation from 1991 – 1999.

The paintings in the attic also had a more particular influence on Colin’s career, for they prompted his interest in the lost paintings of Stowe, that extensive collection which was removed from Stowe during the forced sales which followed the extravagances of the first two dukes. The collection included some hundred portraits, which recorded the rise and establishment of the family from Tudor times to the early nineteenth century, and this shameful loss removed the visual history from the wall.

Colin set out to find the present owners of the portraits and to get a photographic reproduction of each. What began as a hobby became a mission, so that he was able to contribute a comprehensive and scholarly article on the Stowe collection with special reference to the portraits in the Stowe issue of Apollo in June 1973; and after nearly fifty years this definitive article remains the starting point for anyone studying the subject.

When the Hall Bequest Trust was established a few years later, with funds which might be used for the purchase of pictures, Colin was the obvious choice as picture adviser. But after attending one meeting in this capacity, he was immediately invited to become a trustee himself, and for the next thirty years he watched over the cultural and fine art activities of the Trust. Chiefly through him over twenty of the missing family portraits found their way back to Stowe, including all of the owners and several of the other key figures in Stowe’s history.

With his professional expertise he insisted on the highest standards. When a portrait was acquired, he always sent it straight to the conservator to be checked and put in good order; he paid as much attention to the suitability and condition of the frame as he did to the picture and he preferred that picture labels should be gold in colour, and that the name of the subject and the artist should be hand painted in black.

By 2015 enough of the old portraits had returned to make a complete re-hang of the whole collection desirable, and it is now possible to walk through the rooms at Stowe, from period to period, with the appropriate portraits hanging on the wall. This is Colin’s real achievement. No other of Stowe’s sons has done so much to rescue and re-instate Stowe’s ancestors.