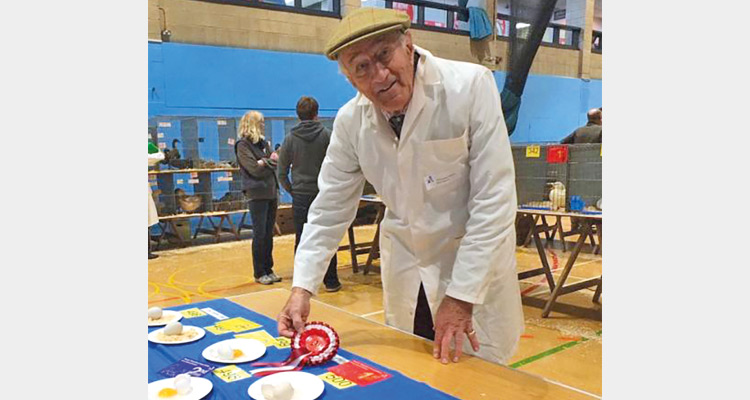 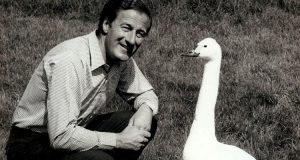 Christopher Marler was a remarkable Englishman, with a wide variety of interests and a life-long passion for breeding animals and birds that touched many people and organisations.

Christopher was born in 1932, the youngest son of Leslie and Doris Marler and brother to June and Richard. Christopher spent much of his childhood during the war years at Wavendon Tower in Buckinghamshire and then nearby at Fen Farm, when the Tower was requisitioned by the Department of War and a group of academics moved in – some accounts say that the Tower was a recording studio for black propaganda broadcast to Germany but certainly had associations as accommodation for the codebreakers at nearby Bletchley Park.  Christopher was given his first pair of Carolina ducks when he was four which fostered a life-long love and interest in water birds. In 1936, an interest in cattle began, when his father purchased six champion dairy shorthorn cattle from the Pierpoint Morgan Herd. From this time Christopher began to understand what breeding meant and how seriously it should be taken. 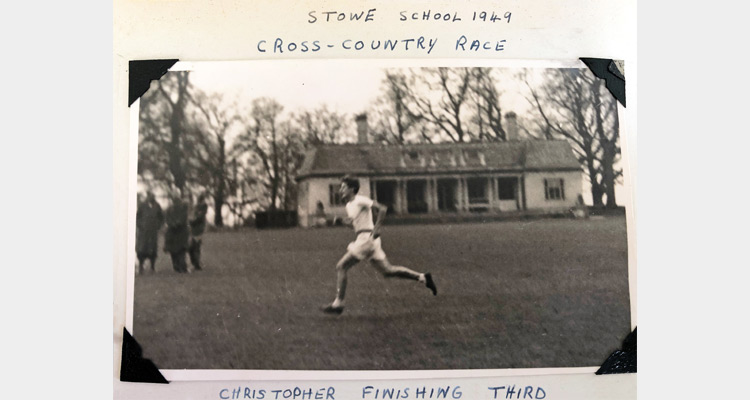 In 1949, Christopher became joint partner with his father in the dairy farm and decided that he would enrol at Cirencester Agricultural College. Christopher enjoyed his time there and it fostered a life-long ability and love of farming. Christopher found the dairy farming focus a bit restricting with the emphasis on how to deliver maximum milk yield from a dairy cow. He wanted to learn more about beef production and organised a student field trip to the Islip Breeding Centre. This helped introduce beef farming into the curriculum at Cirencester.

In 1952, Leslie Marler bought Pheasant’s Nest farm. Christopher moved with his brother Richard into the Manor House at Weston Underwood. This dated back to the early 18th Century and had belonged originally to a prominent Catholic family, the Throckmortons.

The farm was a 600 acre arable farm and the dairy herd was relocated there. Christopher gradually turned this property into a beef farm and over the successive decades built up herds of Galloways, Belted Galloways and a big commercial herd of Blue Greys. Christopher bought two Aberdeen Angus Bulls which helped boost production. Christopher was very successful in cattle production winning at Smithfield Show, and many other fat stock shows across England and Scotland.

Christopher met Shirley Van Moppes at a hunt ball in 1956, followed by a first date at Crufts Dog show – they were to meet at the Great Dane judging area. They nearly missed each other with a mix up over rendezvous but all was well and they married in 1957. Christopher and Shirley had three children – Julie in 1959, James in 1961 and Serena in 1965.  Five grandchildren followed, Jonathan, Daniel, Portia, Lucien and Araminta.  Christopher was a very loving and devoted father and husband and the family was vital to him. The family were bought up surrounded by animals and birds which was a normal existence for them, as well as for the wider family and friends.

Christopher was influenced by the revolutionary book ‘Silent Spring’ by Rachel Carson written in 1962. This book that not only outlined the dangers of pesticides on farming practices in the United States but on its similar impact on the countryside of Britain devastating ecological communities and native fauna. Christopher managed his farm with little or no chemical inputs and the health of the soil is still evident on his farm today.

In the late 1960s, Christopher spent time working in the family property business when his father Leslie asked him to go to Australia over several extended trips to look after properties and business interests there. He cut back the farming during that period.

In the early 60s, Christopher commenced the bird and animal collection that became known as Flamingo Gardens and Zoological Park in Weston Underwood and began in the Walled Garden. He later utilised his beloved Wilderness and the surrounding fields and parklands. Ponds and lakes made up at least 30 acres of the zoo. In time, this became one of the largest private collections of waterfowl in Britain. lt contained all six species of flamingos, all eight species of pelicans, all known species of geese, owls, birds of prey, parrots, bison and of course, the pedigree cattle. The gardens became known for several national and world ‘firsts’ in breeding. 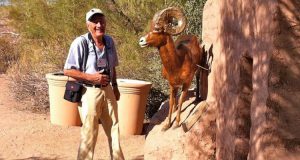 In the mid-1980s, Christopher went back into Beef Shorthorns. In all, he achieved ten Royal Show Championships in the early 1980s, 1990s and 2000s. Christopher liked to personally ‘take the halter’ and show the cattle in the ring. He had a life-long desire to win the Royal Show with Beef Shorthorns. He did win the Interbreed Championship, the Burke Trophy in 2005 which was the pinnacle of his exhibiting career. This led to judging appointments nationally and internationally. Christopher was invited to judge the Burke Trophy at the Royal Show and several major shows in Australia and New Zealand, including Christchurch, Canberra, Adelaide and Melbourne. On these trips he travelled with Shirley, Julie and her husband David to wildlife hotspots including Kangaroo Island in South Australia.

Christopher, with his passion for waterfowl and belief in the Association’s worth, was instrumental in making sure that the BWA could continue. Along with three others; President W.A.T. Morecambe, Rex Hudson and James Heard, he agreed to underwrite significant overdraft facilities with the bank. At the Council meeting in January 1973, he was elected vice-president off the BWA. He served as president between 1978-82 and then again between 2003-05.

BWA member and journal editor, Morag Jones recounts that ‘Christopher’s support for the BWA for over 50 years has been immense. His infectious enthusiasm for discussion and conversation was matched by his deep knowledge of his subject. Livestock was his passion and he was an expert in all species that he kept. We shall cherish his stories and humour, shared at BWA council meetings. Christopher’s good humour could lighten a room. Many of us shared entertainment as he conducted an auction. You’d do well not to stand still, or you might find yourself or your hat fetching a good price. As well as making everyone feel valued, his advice and sensible perspectives kept us connected, by our mutual love of waterfowl. When Christopher spoke, everyone listened, such was his knowledge on a variety of subjects, not just waterfowl. We always enjoyed his measured views, his jovial conversations and humour. His approach to stock was the same, whether with farm animals or when he kept a zoo, Flamingo Gardens; success would come if you have a good eye and study what makes the breed ‘right’.  Breeders up and down the country will remember him with respect and admiration, and he will be missed by all and remembered as a friend and as a Patron of the BWA for all he achieved.’ (Morag Jones, 2019)

Christopher had a passion for bloodstock. He knew every pedigree of every major horse and loved the sport. His first memory of watching racing was the King George in 1948 won by the great Cottage Rake. Christopher’s equine favourites were Arkle, Frankel, and Galileo. In the mid-1960s,  Christopher was asked by his father Leslie to take over management of the Bolebec Stud on the death of his brother Richard. Until that time, the stud was dedicated to breeding hunters and point- -to- pointers. Christopher wanted to expand into bloodstock and set about getting finance for mares and for purchasing stallion nominations. Christopher built a relationship with key trainers at the time including Henry Cecil and Dick Hern and the stud successfully bred winners including Jan Ekels and Duc De Bolebec – creating bloodlines that still exist today.  In later years, he still loved his trips to Newmarket, but was also happy to sit and watch from his armchair.

In the early 2000s, Christopher’s success in breeding and showing cattle came to the attention of Sheikh Mohammed bin Rashid Al Maktoum and his English manager at Shadwell, Richard Lancaster. The Sheikh was entering the world of cattle breeding in England and Christopher was invited to start an Aberdeen Angus stud at Shadwell in Suffolk. Christopher bought Foundation cattle in Scotland and this led to many showing awards including Junior Champion as well as Supreme Aberdeen Angus Champion. In 2004, Shadwell won the Interbreed champion at the Royal Show a well as many others. The herd is currently 100 females and still breeding champions. Christopher was advising Shadwell up to his death in July 2019.

Christopher had a shared passion for athletics with his son James, also a mid-distance runner and a keen triathlete. Christopher met the great mid-distance runner John Landy in Melbourne during the 1980s and saw Harrison Dillard in the 1948 Games, but his real hero was Emil Zatopek. James regularly bought tickets for the Athletics World Championships and Christopher went too.  At the Paris World Championships on 2003, at the final of the 10,000m when Bekele beat Gebreselassie for the first time, James recalls Christopher’s excitement as he shouted out support, recognising the significance of one of the great races of all time.

Christopher was always supportive of young people interested in birds, animals and cattle and over the years was assisted by a wide range of staff and volunteers. Emma Graves, a local Weston Underwood horse breeder and trainer, helped Christopher with the collection through the last 5 years of his life, and supported him in the management of the place and the physical works that entailed.  Others recalled how incredibly supportive Christopher had been at each stage of their education and careers and how much they enjoyed working with him.

Christopher led a full life, with notable achievements and experiences lived with a sense of enthusiasm and optimism. His death on July 6th, 2019, following a short illness has greatly saddened his family, friends and colleagues. He is survived by his wife Shirley, son James and daughters Julie and Serena, and his grandchildren Jonathan and Daniel Marler, Portia, Lucien and Araminta Gaitskell.

With thanks to James Marler, Morag Jones and Charli Twyford