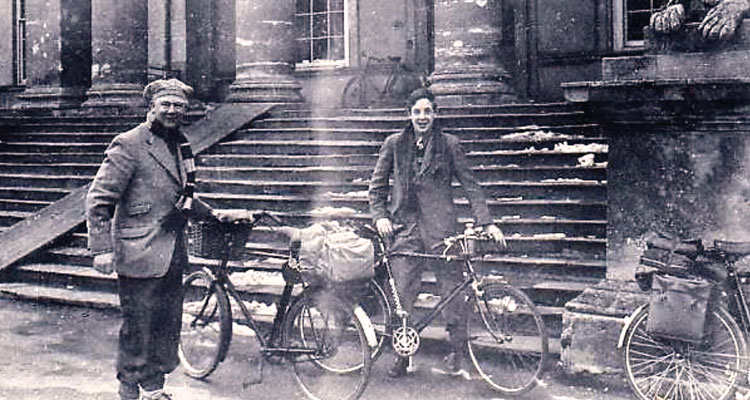 Michael writes, “My first dinner at Stowe, in the old ‘private’ Temple Dining Room, came to the table: a dish-full of silver fish – nothing more. As I had been brought up on an ‘estancia’ in Argentina that was 800kms from sea or river, I had no idea of how to eat a fish. There was little difficulty in passing it over to one of my neighbours, but I watched carefully to learn how it was done. The Temple Houseroom was a delight with a billiard table in the alcove and my father’s name lettered on the panelling as one of the ‘First Ninety-Nine’. During the next few years the memories abound: Capel Cure’s welcome in his study with the tub holding his canes in prominent view, when he presented me with Cantata Stoica and his requirement that Dear Master should be sung fortissimo by memory; the telephone in Plug Street down the spiral stairs from the Entrance Hall where we could make or receive a call; our Egypts just along the way and our tuck-boxes at the other end in a gloomy corner where we could heat up our baked beans; there was another nook in Plug Street where one could squirrel ones way upward, past the Marble Hall’s frieze to the roof and stand above the South Front, ‘Master of all we surveyed’. There was the ‘spud bashing’ down near the Boycott Pavilions, in its season imposed as a minor punishment instead of Standards, enlivened with the occasional chance of seeing Dr. Bostock taking to the air as he crossed the Humpback Bridge. I wonder if many knew the way into the Temple of Concord where, in the shafts of sunlight, it was a joy to open the many drawers holding the massive collection of butterflies. Or, who might have struggled through the thicket beside the Grecian Valley where the decaying remains of a German fighter lay, sadly already pillaged of any souvenir. Not many in these super competitive days, would fancy swimming in the old pool in the Four Acre Lake. There was a definite ‘home team’ advantage by being accustomed to the murky water and fronds of green weed when we were hosting schools with modern swimming pools. I well remember the notice-board beside the fragrant Syringa where the days water temperature was displayed, as we waited for the swimming season to start and relieve us from playing cricket. Nearby was the Grotto behind the little waterfall flowing from the Octagon into the Four Acre Lake – a good place to hide, as was the ice cave near the School Shop. Further afield, the stables near the Corinthian Arch, where Windy Dick kept his hunter. I won’t forget the time he asked me to exercise the horse. Having started to ride when I was three, I thought little of it until once mounted I realised that I still had much to learn: four reins instead of my customary two; “Go On” in place of a dig in the ribs; the horror of the beast’s determined gallop towards the paddock fence, where Windy must have practised his jumps, instead of my usual canter and casting of the lasso. This was a once only event! Temple bikes were kept, gently rusting, in one of the damp bomb-shelters on the North Front and we had the freedom to cycle wherever we wanted within 30 miles, with access to pubs and pharmacies inexcusably forbidden. In the Easter holidays of 1952, three of us, with Windy in command, cycled to and around Holland – unforgettable! Silverstone was one of the favourites where we had free entry on practice days – as long as we were wearing the school tie – and there were hidden places where some would get in on Race Day itself. Pocket money could be augmented by collecting empty bottles and handing them in, but I just collected autographs including my fellow countrymen: Juan Manuel Fangio and Froilan Gonzalez. I was privileged to be taken to the Royal Opera House with another couple of chaps by Windy Dick to see Traviata, which instilled a love of opera and later I was one of the few (I think we were six) who were taken to JF’s funeral. I remember my time at Stowe with nostalgia and lasting affection.”