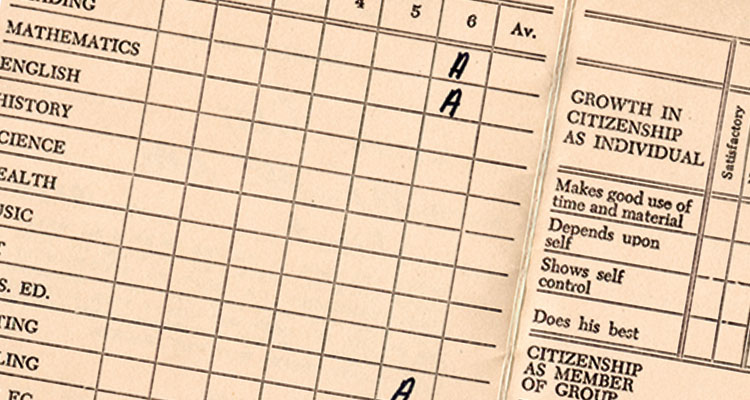 I left Stowe at the end of 1959. For reasons I am not sure about, my final school report was saved and has resided in my wife’s safe deposit box for God knows how many years. I always thought that she intended to produce it if I ever misbehaved and hold it up for all the world to see how hopeless I was.

The report was not encouraging. My geography master (J M Hunt) wrote “…his work has not been encouraging and is curiously disorganised in approach”. That was quite nice compared to my maths teacher (A M Vinen), “one cannot help admire his cheerfulness and perseverance in the face of difficulty, and I wish him luck in this final skirmish with the examiners, while having little doubt of the outcome”. My French master said truthfully, “I have seldom met a person with less aptitude for languages”. My tutor piled it on with, “it looks as if the O Levels are hopeless.” My dear Housemaster (C W Windsor Richards) started his final report with “despite natural inability…”.

My father read the report with anger and told me in no uncertain terms that I was a disaster. I had left Stowe with 3 O Levels which wasn’t enough for a decent job. I was thus sent to a school for idiots to try and get more O Levels. The one on one teaching did the trick and maths, for example, suddenly became easy. Suffice it to say, by the grand old age of 19 I suddenly had 11 more O Levels, making 14 in all.

I was then signed up as an articled clerk to a small firm of West End accountants beginning my 5 year  apprentice. I was paid  £2 gross a week or  £1.9s.6p net. Clearly my father was going to have to support me for a while longer. I had no choice but to live at home rent-free. The apprentice deal was to work a full day in the office and then spend at least 3 hours each night studying Ffoulks Lynch accounting books and submitting written papers to them. They would then mark them and return them with rude comments.

It was  mind boggling boring and a terrible way to learn one’s trade. Nevertheless, I took my finals on schedule in November 1965 and received the news that I had passed in February 1966: so much for my inability to understand maths.

What does a newly minted chartered accountant do? Get more experience. So I joined Peat, Marwick, Mitchell and spent three interesting years doing audits (boring) tax work and being put into two companies to help them figure out why they were losing money. One of those companies still exists and has since credited me with solving their problems. To this day, I have no idea what I did to earn such praise.

I was never meant to be an accountant. It was just a wonderful stepping-stone for doing almost anything else and I will always be grateful to my father for making me do it. I decided that my forte was going to be banking which also sounds dull but is far from it – at least not the kind of banking I would be doing.

I was hired by J Henry Schroder Wagg as a Junior in their banking department. I loved it and became the youngest assistant manager they had ever had. I then made what was probably the biggest mistake of my life by accepting a job at Samuel Montague for an additional £500 a year. I was by then married and had 2 young children and needed the extra money. The job was a mistake and we agreed to part company but I could stay until I got another job (something I doubt would happen today).

I got a job with Citibank and what an eye-opening chapter that was. You called your boss by his first name, no more “sirs”, and what a fun place it was to work in those days under the watchful eye of Walter Wriston who ran the worldwide bank. To cut a very long story short I started off in the corporate bank and had a number of different jobs culminating in working for the investment bank.

That’s when I knew I had found my niche. I had to do a huge amount of travel to all parts of the globe and was rarely home. I did a lot of debt raising for Nigeria, helped buy new 747s for Pakistan and worked on the refinancing of Turkish debt after that country became bankrupt.

At this point, my wife decided she wanted a divorce and as her father was shortly to go on the supreme court there was not much doubt in the outcome. She took the assets and I inherited the mortgage! In order to pay for the kids education I asked for a “hardship” posting and in August 1980  I set off for Doha, Qatar. The posting was a great success. I met my second wife there as she was part of the internal audit team sent out to audit my bank. As we lived 3,500 miles apart, it took the kindness of my boss to allow me to fly back to the UK every two weeks to pursue my American beauty. We married about a year after our first meeting and we were then posted to Riyadh, Saudi Arabia for two and a half years for our sins.

After that it was onto New York and Head Office. I was then head hunted away to work for the largest Saudi bank in their NYC headquarters. My job was to start the NY end of an investment management business. I ended up in control of all the real estate funds and venture capital funds and was Chairman of the investment committee.  I still did an enormous amount of travelling including 40 to 50 flights on Concorde. I ended up working for the eldest brother of the Saudi family who owned the bank. An investment I purchased for my boss was a wildly successful hotel, golf course and development land around the 27 holes of golf. The development was at the bottom of the Bahja California Peninsula (Mexico). It was eventually purchased from us by a Goldman Sachs investment fund. It’s called Palmilla, the golf is by Jack Nicklaus and it’s on the sea of Cortez. It is utterly beautiful but very expensive. A lot of Hollywood types hang out there. But it’s worth every penny – in my biased view. I have nothing to do with it any more. Thus, no more board meetings on the golf course. Life can be tough!

After my Saudi adventures, I was asked to run the NY end of a Mexican bank, which in turn, was owned by a Canadian bank. The Federal Reserve Bank was after the NY end and I had to sort it out. Once that was done successfully, I moved on to a similar problem with a brokerage company.

I retired at the age of 59. At the time of my retirement my income and assets fell approximately  within the middle range of the top 1% of working Americans. Not bad for an Old Stoic who left under a cloud of failure. Isn’t life wonderful!