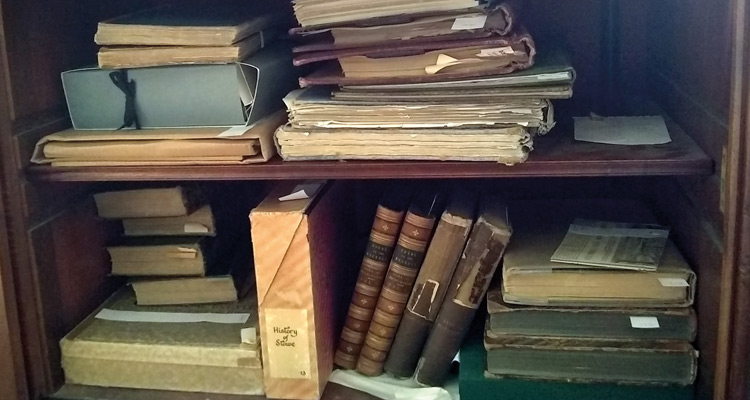 For many years, the locked cupboards below the bookcases in the Stowe Library have housed an eclectic collection called the Stowe Collection. Precisely when it was first given this name is hard to say but George Clarke (Former staff, 1950-1985), who was a Housemaster and taught History amongst other responsibilities, produced a list so-named in 1983. Re-listing, numbering and boxing this collection has been a key task since I began working at Stowe in January 2019. Having now achieved this, it is possible to take a step back and look at it as a whole.

The Collection includes very few items from the Duke of Buckingham’s original Library and many more which have been given to the Library by Old Stoics and parents which may or may not have anything to do with Stowe. It holds a letter from Robert Browning (no connection with Stowe) and an 18th Century letter to George Grenville about the Manor of [Long] Crendon (arguably related to Stowe), as well as the 1924 Letter from Stowe to Eton, with the signatures of those writing in gratitude to Eton College for its gift of trees on the avenue from Buckingham to Stowe (definitely Stowe-related!).

There are published books, antiquarian and modern, whose inclusion seems to be by virtue of their inscription. For example, Winston Churchill and Queen Mary and others written by Old Stoics, such as Sir Laurence Whistler (Grenville 30) and Gavin Maxwell (Chatham 30). A delightful scrapbook by an Oxfordshire clergyman’s daughter dated 1828 seems to bear no relation to Stowe whatever but graphically illustrates life in the early 19th Century.

Records of school societies are well represented with the minute books of both the Debating Society and XII Club dating back to 1925, as well as in-house magazines of 22 school societies produced between 1965 and 1998; the Epicurean dates back to 1929. There are copies of the School’s own books of hymns and psalms, and poems by JF Roxburgh.

The Collection is now closed, meaning it will not be added to, and in future donations or acquisitions of this sort will be dealt with differently. The finished catalogue is available electronically on SHPT’s new Archive Management System and a hard copy will be placed in the Library. It is an exciting start to delving into the House Archives.