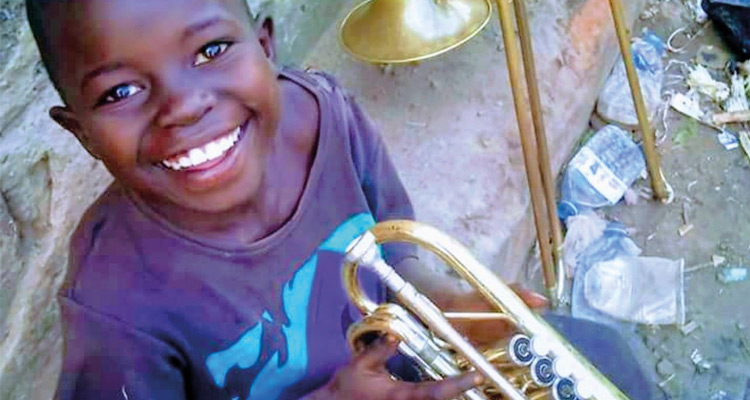 In January and February 2019, I was out in Uganda teaching at the Saved by Music Foundation. The Foundation was set up by Uncle Freddie – an ex street child who left home at the age of seven in search of food and shelter, as he was the youngest of fourteen children and saw a brighter future on the streets than being the lowest in the family pecking order.

After two years on the streets, having been a victim of drug use and rape, an old teacher of his from school saw him, took him into his home and offered to pay for his school fees for the foreseeable future. Soon after he returned to school, he couldn’t help but notice an application opportunity for a music scholarship. However, with no real knowledge of how to play an instrument he applied for the ‘drum master’ scholarship. In Uganda, the ‘drum master’ has the role of conducting the band. However, it’s not as straight forward as that. The drum master must juggle a metre long stick in time, as a means of conducting the band.

The first of two try-outs consisted of Freddie and five other applicants, Freddie was the worst and was laughed at. The following day was the 9th October (Ugandan Independence Day – a national holiday). Freddie watched the celebrations on TV that day and, sure enough, saw the brass band performing with the drum master live at work. Freddie found himself a metre long stick, watched, practiced and improved all day long. The following day was the second try out for the scholarship. Sure enough with the determination and practice he had put in, he rightfully earned himself the drum master scholarship.

This would fund his education and grant him the opportunity to learn the trumpet. When he finished school he set up the Mount Elgon Brass Band, which would later become the Saved by Music Foundation, with the intention of giving street kids and orphans in the same position, an opportunity to live wholesome and prosperous lives. Over the last 10 years the foundation has developed dramatically.

Through donations from western individuals and NGOs, the SBMF now has a handful of trumpets, horns, trombones and drums. During my time out there, I was teaching the saxophone, music production and music theory. We also performed at various gigs, from the opening ceremony of a new primary school to the Prime Ministers opening ceremony for a resettlement programme following the Mount Elgon landslides.

I faced many challenges during my time in Uganda, from asthma attacks to burning petrol stations. I learned more than I taught!