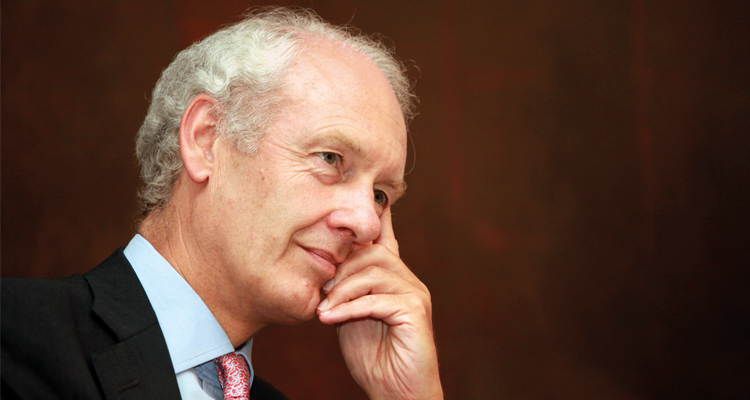 THE LIFE & DEATH OF ALEXANDER LITVINENKO

Anthony Bolton’s (Chatham 67) reputation as one of The City’s most successful fund managers totally eclipsed a life-long love and hidden talent: composing ambitious works of music. This Summer sees the Premier of his latest work, an opera entitled, The Life & Death of Alexander Litvinenko. Our ‘Man-in-the-orchestra-stalls’, Nigel Milne (Chandos 68) tracked him down to discover the motivation and inspiration behind such an enterprising project.

Well, Tony, from being contemporaries at Stowe during the 1960s our lives have progressed along divergent paths – and so it gives me enormous pleasure to find myself discussing the latest forthcoming chapter in what has been a hugely successful life for you. One of my salient memories of you is seeing you clutching music manuscripts and regularly oscillating across the South Front between the Roxburgh Hall and the Queen’s Temple and, of course, witnessing your occasional stage performances.

Years later, however, you have emerged from the fiduciary shenanigans in The City as one of the most successful Fund Managers in the history of financial investment and with all of the financial pundits hanging on your every word and regarding you as the English Warren Buffet – absolutely brilliant – and another First for Stowe!

Anyway, that side of your life has been well documented already. What is not generally known by the Great British Public is that you are an accomplished classical music composer with an impressive and varied back catalogue. And to add to your triumphs, July 2020 will see your first full length opera being premiered at the highly respected Grange Opera in Surrey. Entitled The Life & Death of Alexander Litvinenko, this could possibly be deemed a ‘potato of great hotness’ in that the actual perpetrators of this notorious incident are still very much alive and at libert!!

So, Tony, let me begin by asking you what, apart from the initial intrigue, was it that made you feel that this case was ripe for operatic treatment?

In November 2006, Alexander Litvinenko (Sasha) was murdered and about 18 months later I bought a biography called: Death of a Dissident: The Poisoning of Alexander Litvinenko and the Return of the KGB written by his widow Marina and family friend Alex Goldfarb. I was very moved by the story of his life and how he could be murdered so blatantly in London six years after his arrival in the UK and after he had become a British Citizen. When I finished I had this flash of inspiration that the story had all the ingredients of opera namely, power, politics, murder, betrayal and love. My main question was whether I would be up to writing it. I was working at the time and knew if I was going to attempt it I would have to wait until I retired which I did in 2014, four years later than I had originally intended. The good thing about waiting was that there was a very delayed Public Enquiry in 2015 which established beyond doubt who the killers were.

This is one of a number of notorious incidents which have captured the public’s imagination and as such it has developed a mythical-like status in the Nation’s political history involving shadowy figures and much speculation. Apart from Litvinenko himself and his killer, are there any strong and identifiable leading protagonists or are the other players enshrouded in mystery?

The main characters in the opera are Sasha and Marina and their son Tolya, the oligarch Boris Berezovsky, the journalist and family friend Anna Politkovskaya, the murderer Andrei Lugovoy and the Head of the KGB. Anna was murdered in Moscow outside her apartment on Putin’s birthday and Boris died in the UK after he had fled from Russia in somewhat suspicious circumstances.

Oh my Goodness, this is more convoluted than I had imagined! So, can it be said that this is it the story of a man who had strong principles and a sense of fair play and whose death was the result of exactly the opposite?

Sasha may have not been whiter than white but he tried to expose the corruption he witnessed in the FSB (the KGB successor). Because he did this on TV he was never forgiven. He was also asked to murder Boris Berezovsky, which he refused to do. I cannot think of a more terrible way to die. Ingested polonium attacks the body’s organs from the inside and slowly destroys them. He was in agony for 21 days before he finally died. It was only because he was so fit that he survived as long as he did allowing the police to finally work out how he had been poisoned.

Oh, how unbelievably horrid – as you say, what a terrible way to die! As well as documenting a heinous crime, the opera also contains the ‘Human Element’ in that it could be construed as a love story about a man standing up for his principles and wishing to protect his wife and family by relocating them to a place of hopeful safety. So, could it be said this true tale contains a good moral message too?

There is a strong love story about Sasha and his wife Marina which flows through the opera. He escaped from Russia having sent Marina on ahead on what she thought was a holiday. After he joined her abroad he told her they could never return to Russia. When the US turned down their asylum request they sought asylum in the UK. The opera’s penultimate scene is set in hospital and Sasha and Marina sing of their love for each other.

Let us now consider the music. Is the entire dialogue sung or are the arias interspersed with speech?

The opera is in two Acts of about one hour each. It is sung mainly in English although in several scenes the chorus, who play a major role, sing in Russian. The opera is set in the UK and Russia and the story is told through a number of flash forwards and flashbacks. There are some spoken words but they a generally few and far between.

And how about the orchestration? Will there be lush romantic melodies which, upon leaving the opera house, will have me whistling like an Ocado delivery man or will the score mainly reflect the harsh reality and intense unfairness of the story in its moody melancholy?

The music is contemporary although I hope people will find it approachable. I have a full 52-piece orchestra augmented with a balalaika. There are several very lyrical moments although the score is quite varied and there is, as you might expect, some much more serious music. I have woven into the score quotes from Tchaikovsky, Rachmaninov and Shostakovich as well as a Red Army marching song, the Chechen National Anthem and a Moscow football team anthem (the cover for the killers coming to London was that they were going to see their team play against Arsenal at the Emirates Stadium).

Whilst it is a story of deceit, betrayal and death, are there any lighter moments with which to lift the spirit and inspire hope?

There is one scene when the killer is back in Moscow where he boasts about his medals and how he is now an MP and a TV star. This music is very light hearted and I hope will provide relief from the more serious moments.

Operas are full of plots in which the hero/heroine/villain meets a particularly nasty end but still somehow manages to hit the top notes at the expellation of their final breath. Do you give Litvinenko an absolute belter upon which to expire?

The highlight of the opera is the last love scene between Sasha and Marina. Also, just after this, he regains some strength and sings about how he will return to Russia again. Then after a short but dramatic interlude when he dies Marina returns to sing a final lament while the choir sings a Russian requiem mass.

As well as composing the score for the opera, are you the librettist too? Or has the ‘book’ been written by someone else?

No, I’ve only written the music. Kit Hesketh-Harvey has written a wonderful libretto. I couldn’t really start writing the music in earnest until I had the libretto which I did in 2016/7. In so many ways the words have inspired my music.

Would you consider yourself a composer in the classic tradition, in that have you found yourself being influenced by particular luminaries in the pantheon of Euterpian creativity – or are you a total maverick?

There are many influences on my music but I am probably more traditional than maverick!

During your time at Stowe, can you say that there was a particular music staff member who, on recognising the embryonic Bolton musical talent, helped to nurture it, develop it and cause it to blossom into the inflorescence that it is today?

My teachers at the time were all great and encouraged my composing but I particularly remember Angus Watson (Former Staff, 1955 – 1970), the Head of Music at the time, who sadly died in 2019.

Since you and I were at Stowe, the musical facilities have changed beyond recognition and give the young music student a wealth of opportunities with which to experiment and broaden their talents. Have you been watching their progress and is there anyone in particular of whom you think we shall be hearing considerably more during the next few years?

I wish I had the advantages of learning music in the new Music School which is outstanding. The library room is dedicated to my father who was also an Old Stoic. It was listening to records in the old music library that really inspired me, developed my love of classical music and allowed me to hear composers, like Shostakovich, that I’d never come across before. I hope the School will inspire a new generation of Stoics in the way it did for me.

I know that you have been trying to retire from the world of finance in order to concentrate on your music and you have succeeded in producing this new major operatic opus. Have you got exciting plans for more operas, symphonies or concerti – or even developing a change of style and producing ‘BREXIT – THE MUSICAL’? Now, there is a subject full of myriad plotlines and with all manner of twists, turns, double dealing, duplicity, betrayal, heroes, villains and with a totally inconclusive denouement!

You will have to watch this space!

Well, thank you for taking the time to talk to me, Tony. It is so exciting learning more about someone who is celebrated for their success in one particular field, only to discover that they harbour a totally different skill with which they are about to stun the world. I wish you phenomenal success with Litvinenko and look forward to seeing it, not only at Grange Opera but at Stowe also.

And just as a final thought. Might there also be a little Arcadian theme running through your mind, in the manner of Respighi’s The Pines Of Rome or The Fountains of Rome, which could take flight as The Temples Of Stowe in celebration of the forthcoming Centenary in 2023?

Let’s hope so! Thank you, Tony, once again.