Our records show that over 100 Old Stoics are married to one another – a very impressive number. We thought it would be interesting to find out more about these love stories: is it something in the water at Stowe or the joy of friendship and shared experiences which makes for such happy matches among our members. 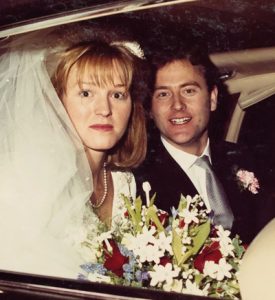 Richard and Lucinda met at work, whilst at Biss Lancaster PR Company, in 1988. They started stepping out in August 1988 and walked down the aisle 16 months later, at Guard’s Chapel. They have just celebrated their 30th wedding anniversary with a trip back to Mustique, their honeymoon destination. 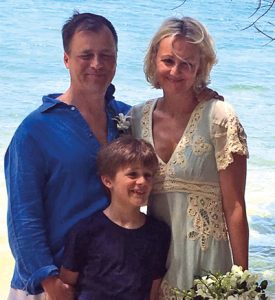 Nicola and Ralph left Stowe in 1991 and 1989, so just missed each other at Stowe but finally met over a decade later. Ralph had just returned from working in Gibraltar and Nicola from Hong Kong. They met at a party organised by a mutual friend in 2000 and have been together ever since. They finally got married in Jamaica two years ago whilst on holiday with Old Stoics, Charlotte Brenninkmeijer (née Wilson, Nugent 91) and Nataliina Langlands Pearse (née Airikkala, Nugent 91). They now live in Gloucestershire with their 10-year son Lochy, a big dog, horses and cows. 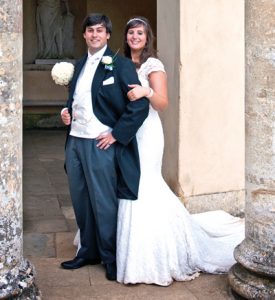 Jonathan and Emily met at Stowe in the Lower Sixth and got to know each other through a shared love of performing. Jonny was Head of Choir and Emily, Head of Altos, and they performed in two Congreve productions together: Les Miserables and Habeas Corpus. Having chosen different A Level subjects, and mixing in different friendship groups, it was productions and choir practices that brought them together. Emily writes, “We returned to Stowe in 2013 for our wedding where we enjoyed a wonderful day at Stowe Church and Stowe House with many Old Stoic friends and former Director of Drama, Nick Bayley, joining the celebrations. We feel so lucky to have met at our beautiful school and it is always good fun looking back on shared memories from our time as Stoics.” They now live in Hertfordshire where

Jonny works as a Barrister and Emily as a Journalist. A passion for performing remains, with both having taken part in various plays, musicals – and even operas – over the years since leaving Stowe. 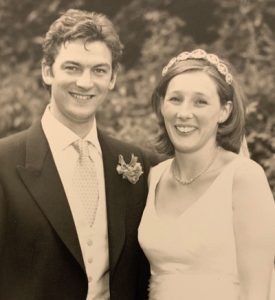 Tom writes, “It wasn’t love at first sight, more of a very slow burn! Our relationship morphed from friend-once-removed, to friends, to great friends and finally to a budding romance in our late 20s!” The friendship started at Stowe in 1993 when the girls joined the Lower Sixth. Sophia, with other Stoics, would holiday on the West of Ireland with Tom during the summer holidays and they both ended up studying in Edinburgh, where they remained good friends but in relationships with other people. It wasn’t until 2004, when they had moved to London, settled into careers and were both footloose and fancy free that their relationship blossomed. They married in 2006, have three wonderful boys, live in Surrey and now run a residential property business together in London. “Stowe is very much in our blood with many of our family (brothers, sister, cousins, brother-in-law) being there, it is a very special place to us, we have made lifelong friends and we obviously met there!” 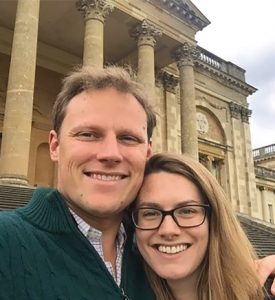 Thomas and Claire are hugely excited to be engaged to be married in May 2020. They met cycling the Camel Trail in 2012, not quite ‘love at first sight’. They got together in Japan two years ago before Thomas proposed on the Isle of Skye in August 2019. Thomas is a Pietra Dura artist and Claire manages the Loans Department at the National Portrait Gallery. 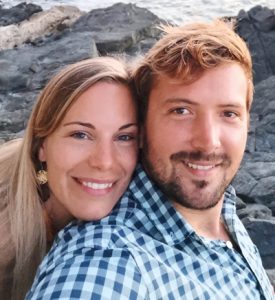 Lara writes, “Mike and I first met at Crossfire, the Christian youth group that gathered on a Friday night in the Temple Room. I was impressed by his drumming and guitar skills, and his South African lilt won me over. Despite the very few months’ age difference between us, we were in different school years and started going out when I was in Lower Sixth and he was in Fifth Form. Not thinking it would last beyond the summer, to my surprise we were still together in September and then, at the end of the year my time came to go to university. We decided to give it a try and stuck together through the separation with Mike occasionally visiting me in Manchester on the odd Exeat weekend. Later, during my university year abroad I went to live in Paraguay to teach English for six months, which we knew would be ‘make or break’ for us. We survived the distance, and Mike proposed during my final year at university, which subsequently involved wedding planning on top of sitting finals! We had a beautiful wedding at St. Mary’s Church, Iffley, Oxford in November 2011, less than six months after both graduating. The adventures continued with a honeymoon in Morocco and then moving to Cardiff where I went to Music College and Mike started working as a project manager for an e-commerce company. In 2017, after an unforgettable trip to spend time with family in Mike’s native South Africa, we were inspired to move abroad and are now based in Gran Canaria, where we live with our beloved beagle/pug cross dog, Humphrey. Living there allows us to pursue our passions: Mike regularly enjoys surfing, surf photography and cycling around his ‘digital nomad’ work schedule. I sing professionally both as a chorus member in the Ópera de las Palmas de Gran Canaria and as a soloist. We have recently celebrated our 8th wedding anniversary and hope the next eight years will be equally as adventure-filled!” 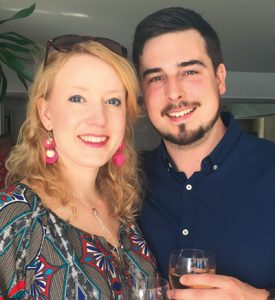 Gary writes, “I first saw her on the shooting range during CCF, before long we became best friends. Whilst we never dated at school, we kept in touch and shortly after my 21st birthday, I finally plucked up the courage to break out the friend zone and ask her out. After keeping me hanging for a day she finally said yes. After two and a half years we got engaged and were married in 2012, in front of a number of Old Stoics, including her father, Philip Gray (Temple 66), sister Natalie Scott-Gray (Nugent 07) and our best men, Thomas Borwick (Grenville 05) and Toby Lucas (Cobham 05), as well as others. We have visited Stowe on a number of occasions to reminisce and most recently when Charlotte filmed in the grounds for a new series due out next year.”

From the diary of Oreo, a Jack Russell, then aged eight months:

“It started off as a pretty normal day: Durgi and I popped into The Brewhouse in Dorchester – the roasts always looked super tasty there…and sometimes I’d be lucky enough to get a little taster, when Maya would drop me something from her plate. Pretty much as soon as we walked in, I caught an unfamiliar sniff…I looked up, and our eyes immediately met across the crowded room…through narrow gaps, between human legs, chairs and bar stools. I was on a lead, therefore I couldn’t investigate to get a better look. I could see another Jack Russell, only a puppy like me, but completely white, with a rough coat. This had never happened before, but her pheromones just sent me bananas – I went barking mad. She obviously felt the same way, as she impressively matched me, bark for bark. Our frenzy caused such a commotion that Durgi and the other puppy’s owner had to take us outside. I then discovered that her name was Cosmo, and her owner was Woody…that was the beginning.”

Durga writes, “Woody and I missed each other at Stowe by a couple of years, meeting over 20 years after we’d left school. As soon as we found out that we had both been at Stowe and also slept under the same roof, at Lyttelton (Woody was there while it was still a boy’s house), we were bound through our shared experiences and fondest memories of our time there. Knowing that Woody had also been at Stowe, immediately made him feel like less of a stranger to me, regardless of meeting him randomly and for the first time. I had already had a daughter (Maya, now 11 years old) when Woody and I met. We now have another daughter, Ottilie, who is six months old. We recently returned to Stowe and spent the afternoon with Charlie Clare (Chatham 94), who showed us the many changes that have happened over the past 20 years. It was great to share this experience with Maya and Ottilie. Charlie thinks that we may be the only Old Stoic couple to have shared a boarding house!” 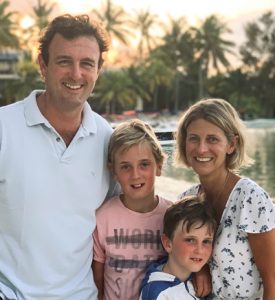 Alex and Tara were friends at Stowe. Several years after leaving school, they went travelling round South East Asia together and that’s where it all started! Having got married in Kent, with 10 or so OSs attending (including former Head Jeremy Nichols and his late wife, Annie) they moved to Australia to live for five years which is where their two sons were born. Tara writes, “We now live in North East Fife in Scotland with Lochie (11) and Jasper (9), where we have set up and run a glamping business on the east coast of Fife (Catchpenny Safari Lodges), for which we won a Scottish Thistle Award for Innovation in Tourism last year!” 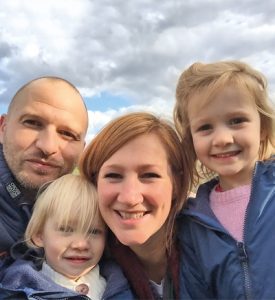 Serrol writes, “I married Vicky on the 12 September 2009, having met as a result of being friends with Vicky’s older brother, another Stoic, Tom Bell (Walpole 96), who was in my year – we left Stowe in 1996. We recently celebrated our 10th wedding anniversary. We met 14 years ago, after we had both left Stowe, and were fortunate enough to have time out travelling the world together for 6 months before settling down. We now have two daughters, Ziva, aged 6, and Lexi, aged 3, and live in Barnes in London and are still great friends with many Old Stoics. Despite never having met at Stowe, having both shared the Stoic experience is something we cherish and marvel at as being some of our most magical times. We take pleasure in returning with our family to this truly special place. Both our girls are registered to attend Stowe, once they are old enough.” 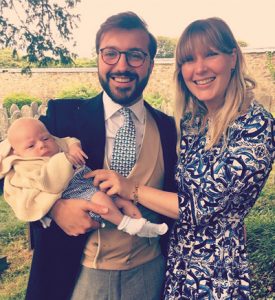 Edward writes, “Jana and I first met in 2003 at Stowe on the South Front steps. Jana remembers our first meeting well, remarking to herself at the time, ‘that is was quite a curious fellow!’ From that day, our friendship grew. After Stowe, we travelled together and went to the same University, staying very good friends. Having both moved to London after University we kept in close contact: we had dinner to catch up at least once a month. After 13 years of friendship, I managed to persuade Jana to let me take her on a date. We have now been married for three years and have two boys, Paddy and Harry! I highly recommend marrying your best friend, it is the greatest thing I have ever done.” 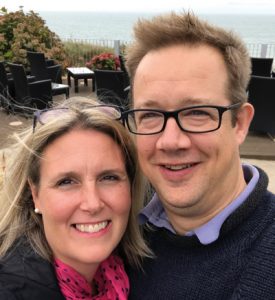 Sam writes, “I left Nugent in 1990, Alex left Temple in 1988 so we actually never went to Stowe at the same time but came to know each other over the years through other Old Stoics. It was a decade later, after a mutual friend, Bryn Hesketh (Temple 88), decided to intervene, that we became a couple! He was duly given the task of being our Best Man in October 2001 when we got married, and then godfather to our eldest daughter, Sasha. As an aside – Alex’s father, Gregory Wolcough (Temple 55), is an Old Stoic, as are my father, Nicholas Hoare (Bruce 61), and grandfather, John Hoare (Bruce 32)! We have very fond memories of Stowe, and just wish it did IB and was closer to our home for it to have been an option for our children too.”