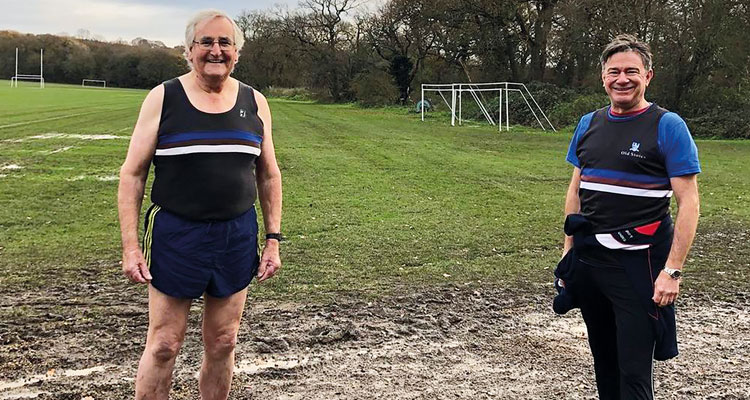 With Old Stoic Day in March being called off, our traditional mad dash around the grounds did not take place. That gave our usual suspects (and newcomers) ample time to train for the December fixture known as the Alumni Race (for Old Boys of invited schools), organised by Thames Hare & Hounds from their headquarters on the edge of Wimbledon Common and scheduled for its normal date of the Saturday two weeks before Christmas.

The race was a virtual one, as has been the case for many sporting events. The Cross Country joint Presidents, Marc Hope (Cobham 79) and Richard Weston (Chatham 65) ran the traditional course together in a time of 71:50.

A marvellous turnout of 10 runners submitted times, far more than we usually have for the December fixture. There are team scores for several age groups for men and also an open category for ladies. Kate Winter (Lyttelton 97), 45:00 and Hannah Durden (Nugent 01), 48:19 would have done even better than their 10th place with a third scoring runner (the missing runners are scored at a penalty figure depending on the number starting in that category). The over 60s came third, Francis Graham-Dixon (Temple 72), 40:08, Neil Harvey (Grenville 70), 50:16 and Richard Weston.

Pride of place however, goes to the same team scored as over 65s who won their category against stiff opposition, showing there’s life in the old legs yet! It’s the first time Stowe has won a trophy at this prestigious event and it’s definitely something on which to build.

So what of the courses chosen by members? Of those on whom I can report I know Hannah and Piers Craven (Bruce 01), 39:48 on a separate occasions, chose a muddy, hilly course around Checkendon in Oxfordshire. Kate was in Northern Ireland and added rain to the aforesaid mix of hills and mud. Francis, in the form of his life and with several very long distance races under his feet, braved an even hillier route over the South Downs. Finally, Neil Harvey overcame a nasty attack of tendinitis for his run on Wimbledon Common.

We look forward to the next OS Sports Day, whenever that may be, including a cross country race and we would welcome more of the recent leavers who compete in other sports and fancy a pleasant run round the magnificent Stowe grounds.