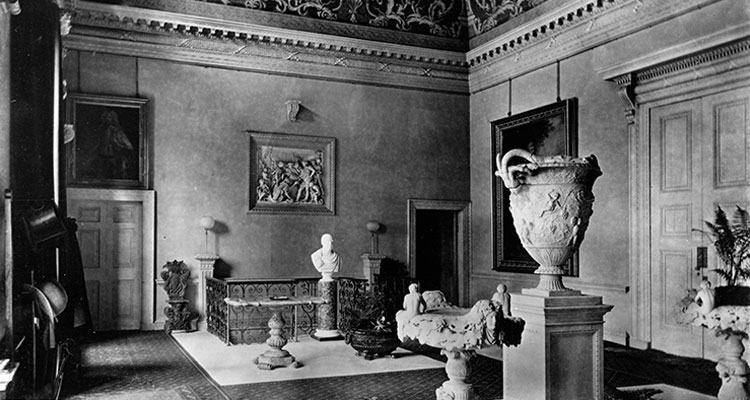 In October 2018, Stowe House Preservation Trust began one of its ‘smaller’ restoration projects – the North Hall floor and walls. Having restored the William Kent ceiling in 2015, we spent time researching what the floor looked like around 1800, the time we try to restore the House back to – the height of financial and political power of the Temple-Grenville family.

We know that in around 1803, the Egyptian Hall and the staircase to it was built and in around 1815 the North Hall fireplace was removed and the overmantel reliefs moved into the positions we see them today. This then confirms that the stone surround on the staircase dates from this time. The modern terrazzo floor, assumed to be put in around the 1950s, although hardwearing was not an appropriate floor type for such a prestigious room.

Researching original building accounts and images showed that from the 1670s until the 1930s there were 4 different floor types, none of which matched each other. The ‘blue and white pavement’ mentioned in the 1670s accounts we suspect are the tiles now lining the east and west corridors, perhaps re-laid when Lord Cobham extended the House lengthways in the 1730s.

The refurbishment of North Hall is not mentioned in the building accounts of the south side of the House by Earl Temple in the 1760s/1770s, although one may think this was the perfect time to relay a floor to match the beautiful new Marble Saloon floor. The historic guidebooks do not mention the floor, but the 1839 room inventory mentions a “Turkey carpet”, the 1848 sales catalogue describes “A Brussels carpet, of marble pattern, about 80 yards” and the 1871 room inventory, 6 lengths of “bordered Brussels carpet” suggesting that at any one time the stone floor was covered.

With the fireplace taken out near the beginning of the century, perhaps this room was carpeted to keep it warm or just to match the other wooden floored state rooms. This suggests that perhaps the floor was hidden for much of the time. This was also the case when Queen Victoria and Prince Albert visited in January 1845. The image for the Illustrated London News of Victoria and Albert in North Hall shows a black and white ‘carrene d’octogane’ floor but diary accounts of the time suggests the floor was covered up with strips of carpet. The 1848 sales catalogue does not list the selling of the floor tiles, just the carpet laid over the top.

We next see the floor in the 1870s series of photographs when the 3rd Duke reopened the House after his father sold the contents in 1848 and it’s clearly a plain stone tiled floor, set at an angle. It must have rapidly declined after 1923 for it to be replaced by terrazzo (man-made conglomerate tiles) in the 1950s.

Stowe House Preservation Trust has laid Purbeck Whetstone, a hardwearing limestone to blend in with the Marble Saloon floor and the Egyptian Hall steps and, hopefully, it will still be there in 100 years.