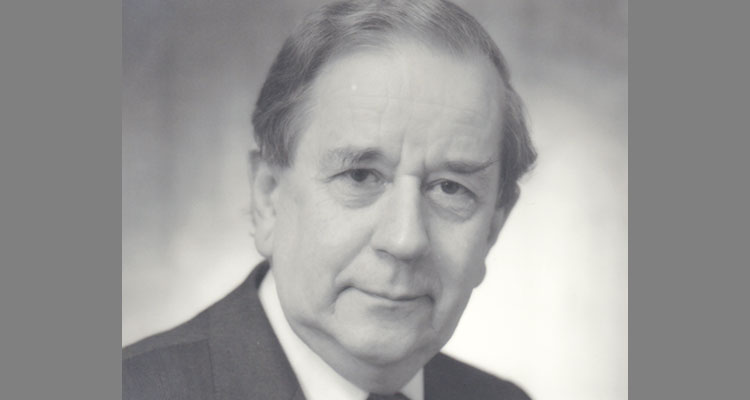 James was the only child of Reginald Cheyne Elmslie and Lottie Louise Carrington. His father was one of the leading orthopaedic surgeons of his generation. His aunt, Dora Carrington was a member of the Bloomsbury Group and the film starring Emma Thompson was named about her.

At Stowe, he excelled academically winning a major scholarship in mathematics to King’s College Cambridge, the whole School had a half-day holiday in his honour, which I suspect made him rather popular! He went up to Cambridge in 1938, unfortunately, he was there for four terms before he enlisted in the Royal Tank Regiment (RTR2), he chose this as a friend at Cambridge had encouraged him to join the Armoured Cadet Force. He was commissioned in 1940 and served in North Africa, Burma, Iraq, Syria and Italy rising to the rank of Major. He was fortunate not to be captured by the Japanese as he was en route to Malaya when they surrendered, so they diverted to Burma.

Although he had the option to return to Cambridge after the war and continue with his scholarship, he felt that at the age of 25 he had seen too much of ‘life’ to return to study at university. So, he elected to remain with the Army, serving in Germany for a period before taking responsibility for the Cadet Force. He was awarded a Military MBE for his services to the Armed Forces. I suspect without the intervention of the War, he might have chosen to become a Don teaching Mathematics.

He met his wife Isabel, on a skiing holiday in Obergurgl in Austria, marrying in 1950 and having four children, three daughters and a son who followed him to Stowe. James left the Army in 1959, using his ex gratia payment to buy a house in Godalming, Surrey with over an acre of land for £5,000! The house was only a few miles from where he lived as a child. This was the family home for the next 30 years.

He joined Pearl Assurance and, using his mathematical skills, he qualified as an actuary in 1963, this was remarkably quick as typically qualification takes seven years. He had a successful career with Pearl, going on to become the Company Actuary in 1977 and Managing Director in 1983, he retired in 1984 and became the Non-Executive Deputy Chairman until the end of 1987.

Following his retirement, he travelled extensively with his wife until she passed away in 2014. He was an avid reader, leaving around 3,000 books in his house and enjoyed playing bridge, indeed he spent the evening of his 100th birthday playing bridge at his club with his son, Nick (Cobham 74). He was a strong family man and was delighted to meet his two great-grandsons before he passed away.