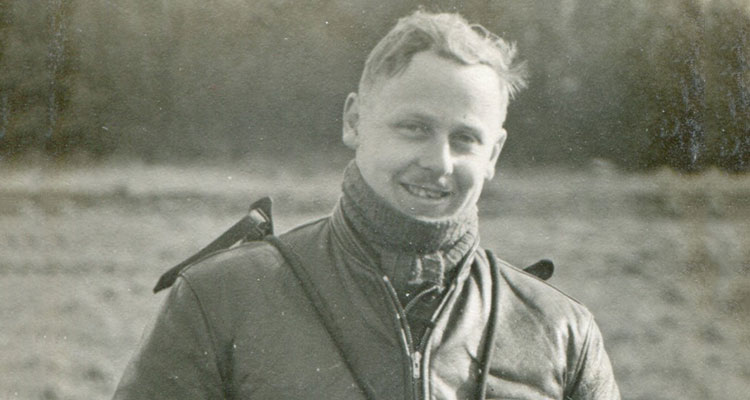 My father, Christopher Fagan Warner (Grafton 40) was born in November 1921 – almost exactly three years after the end of WWI, which had brought his parents together.

Fate dealt him a mixed hand. He came from a wealthy Leicestershire family: his grandfather Edward Handley Warner was once described as a merchant prince and his uncle William Pochin Warner, had owned Quorn Hall, home to the famous hunt. In 1925, when he was four years old, both Chris’s father, Christopher Brooks, and his grandfather died.

My father arrived at Stowe in January 1936 and was in Grafton. Two years later, his mother suffered a major stroke. The Great Depression was in full swing and trouble was already brewing in Europe. He once told me that he had hated Stowe but never really said why. I countered by saying how much I had enjoyed it. “Ah,” he said, “I know I shouldn’t say this but I had a lovely war.”

Although he might have hated Stowe, he seemed to have embraced many of the Stoic values – irreverence, individuality, courtesy, good manners and a wicked gallows sense of humour, which often manifested in pranks, which he recalled with glee.

After Stowe, came art school in Norwich where he met my mother. She recalled how when they were hanging an exhibition, Chris followed a student up a ladder. At the very top, the student held a large painting in both hands. He apparently pulled the lad’s trousers down and they all went to lunch.

Too young to enlist, Chris joined the Home Guard where he said he was the Private Pike of the platoon. He loved telling us how, during a gun safety session, the platoon commander managed to put a .303 round through his own gas cooker. One moonlit night the platoon was spooked by strange noises on the marsh they were guarding. Convinced the Germans had landed, they ended up shooting a cow which didn’t seem to know the password and had declined to “advance and be recognised”.

At Chris’ enlistment into the armed forces, he was asked if he could ride and shoot. Of course he could. It was these dexterities and hand to eye co-ordination which saw him selected for the RAF.

After basic training, Chris moved on to flying Tiger Moths and later his beloved Spitfires. He must have been a very able pilot because he was selected for Photographic Reconnaissance and joined the elite PRU. It was hairy stuff, the aircraft were painted sky blue, capable of flying high and fast. Stripped out to save weight, there was no heat, no guns. Just you, your flying ability, a compass, a map and the wing mounted cameras. Pilots were their own navigators, flying over occupied Europe, expected to achieve meticulously overlapping attack runs and get the film home for 3D interpretation. Spitfires and his PRU experiences were never far from his mind for the rest of his life. 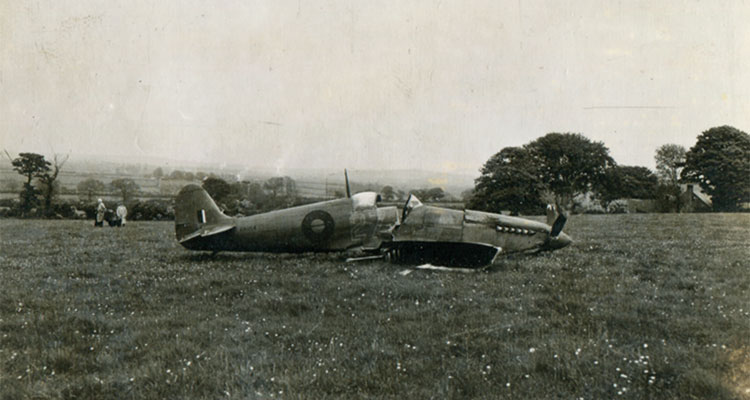 Chris suffered a life changing crash caused by a catastrophic engine failure on take off. “Luckily for me,” he said, “my harness broke or I would have broken my neck on impact.” The price for his life was a face badly smashed when he was flung forward into the canopy. Nobody could tell my mother where he was and, after six weeks, she presumed he was dead. He came out of his coma and was eventually discovered in a hospital enjoying food sent in by his local pub! It was the end of his PRU stint because his sinuses were shot and he could no longer cope with the high altitudes.

Chris’ flying wasn’t over though and he delivered the interpreted PRU photos to the advancing allied battle groups so they could see what was up ahead.

However, his “lovely war” was filled with lighter MASH-like moments. He recalled how some Australians who took a dislike to the CO had locked four sheep up in his office over the weekend; how a fellow pilot was caught smuggling two dozen watches strapped to his braces because they started ticking when he saluted; how he had to fly an Anson with twelve WAAFs to Berlin for some do and how he and his mate had tampered the port engine so they just had to wait in Berlin for spares; how someone had begged him to bring back a motorcycle and sidecar.

My father thought it was hugely funny to pull back the stick so hard that the g-force buckled the legs of some unfortunate who was trying to pee down the urinal pipe; how hilarious it was to drop beer bottles half filled with sand which whistled like dropping bombs; what fun it had been to put aviation fuel in a latrine ditch and light it under a number of bare bottoms. But he never said much about what he actually did as a pilot – just little references, like, “going through the gate”, which was about six and a half seconds of extra power you could call on in an emergency before the engine blew; a metaphor for being in extremis was, “using the upper rudder bar”, which helped you lie back in order to reduce the g-force when you were doing aerobatics while fighting. His favourite escape was a half loop with a roll off the top.

Asked by his granddaughter what had most surprised him during the war, he replied, “To be alive at the end of it.”

After the War, Chris raced his Healey at Silverstone, toured a shattered France in it, he shot, fished, sailed, skated, played water polo and taught gliding. He taught me and my brother all these things. “Make a decision boy”, was his instruction to me when I froze while trying to get out of a spin.

He was always very private, not given to displays of affection, perhaps found it hard to form deep friendships because so many people didn’t make it back to the pub. As the years went by, he became increasingly withdrawn and in later years was quite reclusive.

Chris smoked a pipe every day and drank large glasses of Bushmills every evening. He lived to be nearly 93. One day he said to me, “Willie (I was the third Chris so they called me Willie), I’ve had enough.” He ate his favourite fish and chip lunch on a Sunday and died peacefully on the following Friday. His watch just stopped ticking.