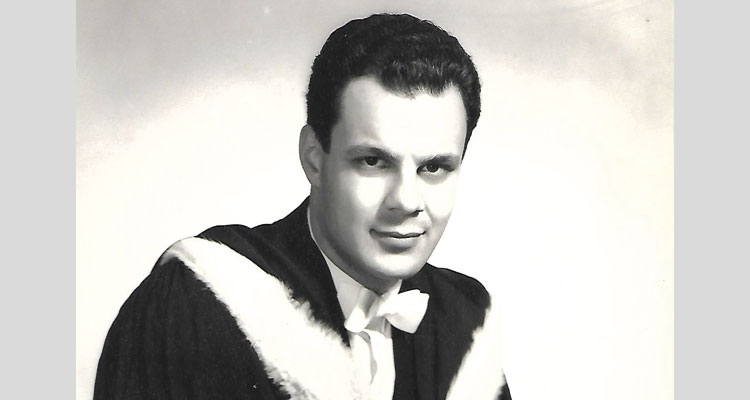 When Alexander arrived at Stowe at the age of fifteen, he was already a Scholar; for reasons of ill-health he had to be taught privately in Switzerland, his tutor and mentor being the recently retired Headmaster of Aiglon College, Dr Frank Wynyard Wright, who was a gifted teacher and confirmed classicist. His pupil was already quadri-lingual in French, German, modern Greek and English, but by the time he came to Stowe he was also able to converse in Latin and ancient Greek. In fact, English was the last language he learned as a child, which his tutor improved by making him read Shakespeare’s works extensively, but he always deliberately maintained a very slight French accent when speaking it, which he used to say “sounded more attractive to the girls”.

His father, Jean Zafiropulo, was a qualified engineer from the Ecole Centrale in Paris, a mathematical philosopher and an honorary professor at the Sorbonne; his mother was the only daughter of the Greek shipping tycoon S.G.Embiricos, and his uncle was George Embiricos, the shipping magnate and art collector. The Embiricos were Andriots, from the island of Andros where Alexander would spend childhood holidays at the family house.

In fact, that childhood was mostly spent being taken round the principal picture galleries and museums of Europe by his father, who had an unerring eye for classical paintings, notably those of the Italian Renaissance and who explained them, their composition and their technique to his son in minute detail, resulting in Alexander acquiring the same “eye” as his father, with remarkable consequences.

When he was still in short trousers, Jean took him to the Borghese Gallery and Museum in Rome to show him its artistic treasures that he had hitherto only seen many times in books; and there he took Alexander up to the first floor to see their famous collection of Raffaellos (Raphaels). The young boy examined them closely one by one and then turned to his father, pointing at one painting and announced that it was not entirely by Raffaello but mostly by the students in his atelier, as only the right hand was by the master himself. His father took off his glasses and folded the lenses over each other to transform them into a magnifying-glass, and then peered intensely at the right hand and then at the rest of the picture. He nodded his head thoughtfully, then proposed that they continue round the museum and return to the painting at the end of their tour. When they did so and he saw it again, Zaf (as we all knew him) was even more convinced and his father, knowing he had taught him all he knew, agreed. So, the curator of the museum was hauled out, not without some difficulty, and told of their conclusion, being doubtless totally bemused by the fact that it was that of a boy not yet in his teens; but Jean made it luminously clear that if it wasn’t then verified professionally he would make one hell of a stink — and so experts were brought in from around Europe and concluded, almost a year later, that the right hand was by Raffaello and the rest by his studio painters. Zaf Junior’s “eye was in”!

Not many years later, and just before he came to Stowe, Alexander had the opportunity to use his extraordinary talent to his family’s advantage. He was staying with his father in Zürich in the mid-1950s and they found themselves rummaging in the gloom at the back of an unprepossessing antique shop in the old town. Suddenly a small, dark, dusty painting in an ancient frame caught Zaf’s eye. Holding it under a flickering light bulb he examined it carefully and then whispered to his father that he’d found something very special indeed. It was a portrait that had clearly never been cleaned since it was painted and it was priced at the franc equivalent of about €300. “What do you think it is?” asked Jean. “Well”, said Zaf, “it looks very much like Titian to me, very possibly a self-portrait, but until it has been properly cleaned, that is only a hunch”. His father agreed it was a possibility and (as usual!) the more Alexander looked at it the more convinced he became. “We mustn’t appear too interested,” warned his father, “or they may suspect we’re on to something”, so they offered €100 and settled for €200. The painting was duly restored by the renowned Florentine specialist Lionetto Tintori and revealed one of the only self-portraits by Titian to remain in private hands, its “discoverer” still barely in long trousers.

He was not a great sportsman when it came to team games like rugby or cricket, but he took up fencing and became really rather good at it, continuing after Stowe to fence regularly at the Lansdowne Club when he went to live in London. He also became a proficient golfer, playing often with me at the West Sussex Golf Club as well as at Valbonne and Mougins in the South of France.

After Stowe, Alexander went up to Balliol College at Oxford where he initially read Greats (a 4-year course), gaining a 2:1 at Moderations (remember he was already a Greek & Latin Scholar), then switching to Modern Languages, notably modern Greek and French, for his final two years, when again he passed with a respectable 2:1. Had he even bothered to “open a book” he would doubtless have sailed through with a double first, but he was enjoying himself too much! One reason for this was that, in generously providing him with some “extra pocket money” his Uncle George (who, like his mother, lived at the Palace Hotel in Lausanne) had miscalculated on the exchange rate, and instead of sending him a handsome monthly €600 as promised, seemed to be providing €6,000, which in those days was an absolute fortune! This resulted in riotous weekly dinners at The Elizabeth, then Oxford’s finest restaurant, with up to a dozen guests on occasion and restorative Sunday lunches at The Bear in Woodstock. Heady days indeed!

But it wasn’t all hedonistic play. The patterns, or perhaps more accurately the priorities, of his life were falling into place. As a dear friend of his put it to me recently, “his life on Earth was mainly filled with the pursuit of beauty, aesthetic or intellectual”, and she hoped he achieved as much as he wanted to in both those endeavours over his four score years. I believe he did.

After Oxford, Alexander moved to London where he was to live in a charming duplex flat at 36 Wilton Crescent in Belgravia for the next forty years, eventually acquiring the whole of the rest of the building. To say it was something of a museum would be an understatement. Its eau-de-nil walls (always repainted in the same institutional colour) were adorned by his Titian, a Rubens, a Rembrandt and a remarkable Paul Didier pere triptych, all collected masterfully by the Zaf’s pére etfils, his father having his own room on the upper floor that he visited regularly from his home in Zürich.

From Wilton Crescent, Alexander commuted by taxi to the S.G.Embiricos offices at the Baltic Exchange in the City, where he was responsible for daily communications (usually on a very ancient Greek-alphabet typewriter that only he knew how to operate) with their executive office in Piraeus. There he worked with his cousin Nick Embiricos, but one suspects that neither of their hearts were really “in it”, Nick and his wife being devoted to their string of racehorses at their stud farm near Billingshurst, and Alexander preferring to spend his time in galleries and museums to logging the movements of shipping in a dusty office where the only music was the insistent chatter of the telex! But his mother, to whom both her son and her nephew deferred as the senior remaining representative of the Founder, ensured that the two cousins remained at their posts while she was alive.

This did not, of course, preclude their absences on wonderful holidays, and in Alexander’s case for almost a decade in the sixties and early seventies we skied every winter at Courchevel and spent our summer or early autumn breaks, often on boats, in either the Mediterranean or the Aegean. Cruising the Cycladic islands with him was in itself an education, as his knowledge of Greek antiquities was encyclopaedic.

When eventually his mother died, the cousins quickly closed down the business, which by then had become more of a shipping management company than a significant shipowner, and Alexander married the love of his life, Margaret Lim, who had been an academic attached to the Modern History Department at LSE and was a qualified solicitor from a family of barristers all trained at the Inns of Court, but above all who shared his aesthetic passions and was his perfect companion and indeed soul-mate. She brought him great happiness and fulfilment and encouraged him to pursue various academic ambitions that had largely been put on hold previously.

After almost half a century in England, they finally left London to settle in a flat in Lausanne and later in a house in Thission, a leafy district in the centre of ancient Athens close to the Acropolis, where Margaret was able to indulge her passion for all things horticultural in an unusually sizeable private garden. Even when they were in Belgravia they would weekend at her small early Victorian house in Bow where by London standards she had a substantial garden to which she was devoted. It was an unusual “weekend commute”!

In recent years Alexander began to suffer from quite complicated heart problems resulting from long-undetected fibrosis of the lungs, which resulted in his being unable to travel by air without cumbersome apparatus, so they were effectively confined to their Athenian life where, literally on his 80th birthday on the 6 January 2021, he was taken into the hospital where he died on the night of the 24.

His was a life well lived, blessed by a talent that few possess and a wonderfully inquiring and scholastic mind. All who knew him were touched by his enthusiasm, by his kindness and his humanity. He was a gentleman in every sense of the word, both gentle and decent, generous and often simply inspiring. No-one could have had a better or more loyal friend and he will be greatly missed by the many that were his.