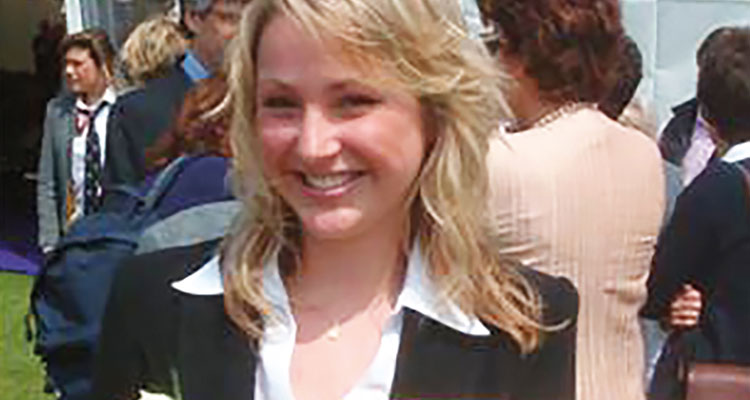 Abby passed away, aged 24, on 9 December 2015 in the Royal Brompton Hospital, London with her family (mum Georgie, dad John and brother Pip) by her side, following a six month battle with large cell neuroendocrine carcinoma, a rare type of lung cancer.

Abby bounced into my life when she was 14 years old when she joined Buckingham Ladies Hockey Club when I was Captain. At the time I could not have imagined the impact that she would have on my life and my family. Having attended Swanbourne House Prep School, she had moved on to Aylesbury High School. At 14, Abby was already an accomplished athlete: she represented Bucks in the English School Games at Heptathlon and was selected to play for England U16 at hockey a year young, but Abby loved being part of a team and, therefore, it was hockey that became her real sporting love. Abby went on to be named as England U16 Vice-captain before joining Stowe in the Sixth Form as a major Sports Scholar.

When she arrived at Stowe to study French, Geography, Sport Science and Biology, my relationship with Abby evolved again as I became not only her teacher but her academic tutor and, all the time, we continued to be team mates at Buckingham Hockey Club. Abby never quite mastered calling me Mrs Jones but for the most part she managed to avoid calling me Tracy! We continued to travel to games together on Saturdays, the only difference now being that she would insist we spoke in French, she was so passionate about the language, so determined to learn and to, one day, become fluent.

At Stowe, Abby continued to excel and flourish; not only was she an outstanding sportswoman but a keen thespian, taking a main role in the Senior Congreve production The Boyfriend, and also a gifted but very modest musician. She sang in the School choir, was a grade 5 pianist and performed in the Nugent House Part Song group that won all three trophies. To this day, I still feel emotion remembering when she sang a duet with the talented Floss Hopewell (Nugent 09) at the Prefects’ Dinner and recall her sheer joy at performing with The Yale Spizzwinks in the Marble Hall singing Happy Ending by Mika. Such was Abby’s humility that despite numerous requests it was rare to hear her sing or play in front of others and so these are some of very few memories I hold of hearing her perform.

Abby had an infectious zest for life and boundless energy; she seized every opportunity and rose to every challenge. She was in the Nugent Coldstream Cup team which outperformed all the other girls’ houses – and all but one of the boys; she played House netball, was the leading scorer in hockey, helped Nugent to lift the House Hockey Trophy and was one of the first girls at Stowe to play for a boys’ team in the Lent term, when there was no school hockey for the girls.

In her Upper Sixth year, Abby was chosen as a Senior Prefect and became a day girl to allow her to dedicate more time to her sport. During this time, she lived with my husband and me for part of the week to help balance her commitments. I will forever cherish those special times; she was then and will always be a part of our family. Abby continued her success in hockey; she was instrumental in the rise of Buckingham Hockey Club through the leagues and into the National League and she enjoyed her own personal success, being named in the U18 hockey team that represented England in the UK School Games as well as being invited to England U21 training.

Abby’s commitment and energy extended beyond the sports field, music and drama and I can honestly say it was a privilege to teach her. To quote colleagues also fortunate enough to teach her, “She brought a friendly smile, good humour and warmth to every class”. Her “…contributions were considered and intelligent, her work ethic exemplary and her love of learning was contagious”. “There are no barriers in life as far as Abby is concerned and she was a shining example to those around her of how to make the best of life”. Abby was awarded the Colin Shillington Prize for Sporting Achievement on Speech Day 2009 and left Stowe having achieved AAB in her A Levels.

After Stowe, Abby went to Birmingham University to study Geography, graduating in 2012 with a 2:1 Honours degree. In the summer after graduation, Abby decided to take on the challenge of cycling over 5,000km from London to Istanbul in 6 weeks and raised over £3,000 for Cancer Care and Haematology at Stoke Mandeville Hospital. Abby then spent time travelling and did a ski season as a rep in Val D’Isère, France. She completed the TEFL course in Paris and following a number of interviews was selected to be a part of the Leonardo Da Vinci programme that gave funding to young people to develop their language. She completed a three week intensive language course followed by a ten week industry placement and it was here that Abby realised her ambition of becoming fluent in French. Abby then joined the Aldi Graduate training scheme in Bristol and quickly became an Area Manager.

Even through her devastating illness, Abby’s positivity and optimism shone through. She focused on what she did have and continued to spend her time worrying about and trying to look after everyone else. Without fail and at whatever point I spoke to her during her six month battle, she would always start by asking how I was and how my family were.

Abby’s life was celebrated in the School Chapel on 22 December 2015, on what would have been her 25th birthday. Nearly 800 people, friends, family, Old Stoics and staff, dressed in bright colours, came to Stowe on this emotional, devastating and beautiful day. I was honoured to be asked by her parents to speak at her funeral. To me, Abby was so much more than her list of impressive achievements and accomplishments. She was a great friend, someone who saw the good in everyone and everything, who embraced every moment with a smile, who possessed a natural warmth for others and who just made life better. In Abby’s final school report at Stowe I wrote, “Stowe was a better place for Abby’s presence and will be a lesser place in her absence”. I believe that this is now true of the world.