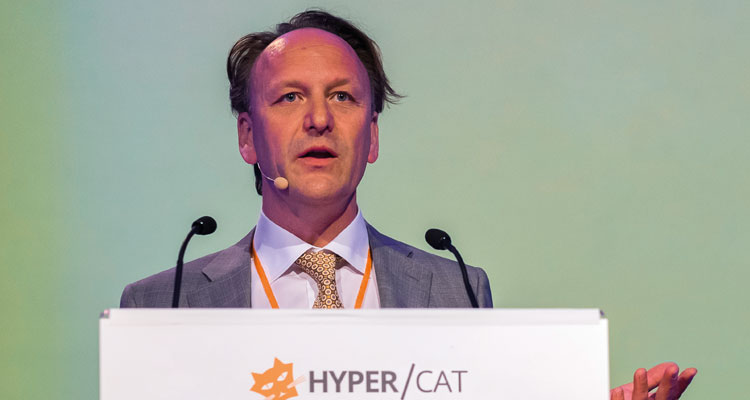 MAKING A DENT IN THE UNIVERSE

There is an awful lot of transformation going on right now in businesses across the world that is digitally related. When we think about driving change, so much of it comes back down to this new world order that is connecting us together by digital means and everything that we do is being captured in some digital form and process. It is very rapidly changing the way that the whole world runs.

When Justin Anderson (Cobham 85) was a child, he and his father, Dr Mike Anderson (Cobham 57) sailed together and entered the Nationals for GP14s dinghies. There were 50 boats in the race and when the race started, 49 of those boats went one way, with Justin and his father going the opposite direction. Justin looked at his father and exclaimed “Dad, what are we doing? Everyone is going the other way.” He looked at Justin and replied “Son, look out to the horizon. Do you see the ripples on the waves? There’s wind coming from over there and if we catch that wind first, we will get ahead of the fleet.”

Guess what? They ended up in front of the entire fleet! This moment was one that shaped Justin’s attitude to life, he has always tried to look a little bit further ahead to work out what his next move is going to be and then manoeuvre to the ideal position to take advantage of change. This has led to some really exciting, ground-breaking projects including setting up the UK all-party parliamentary group on Artificial Intelligence to drive debate between MPs and Peers on the impact of AI; having the responsibility of upskilling 70,000 consultants in KPMG in emerging technologies; setting a British Standard (HYPER/CAT) to help machines to connect to each other. All of these projects have been based on Justin’s personal philosophy and values for success as he has strived
to make some small dents in the universe.

We’re here to put a dent in the universe. Otherwise why else even be here? – Steve Jobs

Hard thought is the catalyst of any transformation. To make a dent, you need to concentrate on building blocks of ideas into an empowering vision. The more visual the vision the better.

In 2017 Justin moved to Australia to work with KPMG advising the federal and state government on how technology could make a positive social impact on Australian cities. At the time, he was collaborating with Euan Leckie’s (Chandos 86) 3D CAD company, with modelling capabilities to bring objects to life. Justin had previously set a British standard for connecting machine’s together. Together, they worked on how parts of the city could be given intelligence by connecting them to the Cloud.

Euan’s company rendered a set of futuristic designs which allowed Justin to take a vision for the future to the Government and inspire funding programmes. By using a realistic visual aid, they could create a strong and compelling vision for their ideas that included adding sensors to street furniture, monitoring carbon emissions, levels of lighting and density of traffic.

For some businesses, the pandemic meant a scrappy, disorganised implementation of technology to allow people to work from home and still work in a collaborative way. This was not the case for KPMG. Just prior to the pandemic, Justin inspired the roll out of Microsoft Teams. When the country entered lockdown, the firm was able to instantly move into the new world order.

To get investment into that scale of project in the UK, the 600 partners all needed to be happy with the decision. This could have involved lengthy communications by email and small-scale presentations, but instead Justin took over the iMax theatre in Bristol to communicate the transformation. All the people who were needed to buy into the vision to push the change through were invited. Justin worked with a production crew that used all the latest techniques to make it compelling, exciting and interactive. The presentation captivated the audience and clearly communicated the future of the technology. The CDO then quickly received full support with the project being rolled out in record time.

When trying to make change happen, action needs to be taken and it is good to think big. Justin is currently working on a project with Hugo Critchley (Cobham 84), one of the world’s leading psychiatrists and neuro-scientists in understanding signalling inside the brain and how the brain works.

Together, alongside the University of Sussex and the Brighton and Sussex Medical School of Psychiatry, they are using computer vision to look inside the brain and EEG recordings, which pick up electric pulses on the surface of the brain, to begin to understand neuronal activity inside the brain. They have been able to obtain 20,000 time-series brain recordings of patients who have had epileptic attacks induced and are in the process of taking that data and using artificial intelligence to simulate, in a 3D model, an epileptic seizure that can be picked up through the EEGs. Using MRI scanners, they can then compare the electrical readings, which allows them to understand more about how signals that are received on the surface of the brain relate to what is going on inside the brain. Not only does this help with the diagnosis of epilepsy, broader neurodegenerative diseases and any other neurological disorders, it will allow them to help change the way people think and to interface directly with the brain. Their vision for this work is to alleviate the suffering in tens of thousands of people who suffer from epileptic seizures and in terms of the technology; a brain computer interface, which allows people to interact with a computer through the power of thought, really is just around the corner.

It is important to think about long-term relationships over any short-term gains. Even in our world of transactional technology, personal trusted relationships are fundamental to making dents. Justin traces his career back to his time at Stowe in the early 80s where he learnt to code in the School’s computer room. Here, he formulated a small software company with fellow Stoic, Jason Meads (Cobham 85). Fast-forward to 1999 Justin and Jason raised £1million from VCs to start up a software company focussed on building a platform that connected companies directly to their customers across multiple electronic channels. From here, the company evolved and Richie Saville (Chandos 85) joined. The strategy pivoted to Richie’s powerful vision, to develop a platform that enabled non-coders to build software. Richie was way ahead of his time. KPMG saw this and invested a further £3m in the business.

In the world of innovation, leadership is key. Justin is a huge believer that the disruptive businesses of tomorrow will be driven by the younger generations with new skills. Leaders need to recognise that and find ways of embracing that way of thinking. It isn’t straightforward as it requires big cultural change and different ways of working across businesses. The underlying culture within a business will determine whether or not that company will move in an innovative way and make the decisions and changes that need to happen to make sure that they can stay ahead and be relevant in the future.

Staying relevant is critical and Stoics need to ensure they take a path which keeps them relevant. This requires a continual process of reinvention as the world unfolds. Those who hold a view of “this is what I’m doing and this is where I’m going” and expect that they are going to get to that place without that place having moved along the way will be disappointed. Things are going to change, Stoics must anticipate the change, be continuously curious about those changes, embrace the change and not be scared about it.

There are forecasts to suggest that by 2030 we will reach a point when AI will be more intelligent than mankind, the impact of which is that all human life will be irreversibly transformed. This can be a really scary or a really exciting thought. For Justin, it is an exciting one, he believes that the key will be to be in a ‘good place’ when it happens, as a result of what you have been doing before it happens. Building a strong awareness of what is going to happen and how the change may affect your life is crucial.

On the journey of change ahead, Justin believes that the only way for him to reach his potential is to help those around him realise their potential and make a few dents along the way.

This year Justin will be training for a Flying Fifteen dinghy championship with Charlie Mckee (Cobham 81), CEO of Alpine Property intelligence; they have sailed across the channel a couple of times together. Justin will be keeping a keen eye on the wind.

You can connect with Justin through Stowe Connect (search for ‘Justin Anderson’ in the Directory) or LinkedIn.

Justin is a huge believer of the fact that future businesses are going to be driven by the younger generations who are coming up with new skills that can change the world.