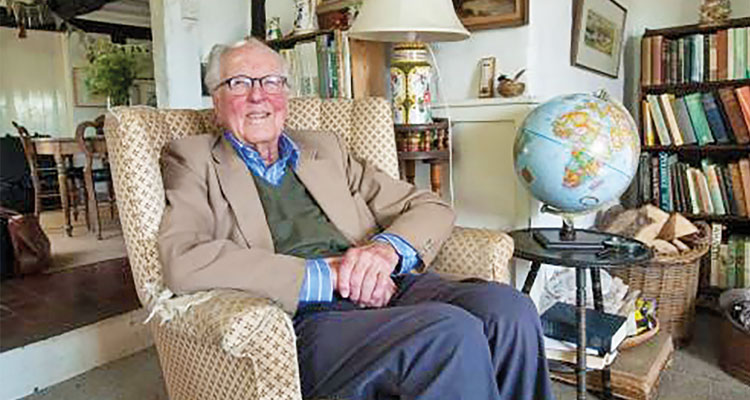 Lord Hutchinson, who died aged 102, was a leading criminal barrister whose career included the defence of Christine Keeler, Soviet spy George Blake and Howard Marks. He was also on the team that defended the publishers of Lady Chatterley’s Lover and was the model for John Mortimer’s character, Rumpole of the Bailey.

Lord Hutchinson was the son of a noted barrister, St John Hutchinson KC, and his wife Mary Barnes. He was at Stowe between 1928 and 1932, before going to Magdalen College, Oxford, where he read philosophy, politics and economics. Called to the Bar in 1939, his career was interrupted by the outbreak of World War Two and he joined the Royal Naval Volunteer Reserve.

A man of impeccable liberal credentials, Hutchinson became a Labour candidate in the 1945 general election, encouraged by an Admiralty decision to give an extra month’s leave to anyone who stood for Parliament. He took on the safe Conservative seat of Westminster, which contained 10 Downing Street. After his inevitable defeat he turned his attention to carving out a career at the criminal Bar where he was able to bring to bear his liberal outlook and his passion for social reform.

In 1960, he was part of the team that defended Penguin Books after it published DH Lawrence’s novel Lady Chatterley’s Lover. Lord Hutchinson had cannily pushed for as many women jurors as he could get. “I’ve always taken the view that women are much more sensible about sex,” he later said. “Men get so worked up about it.”

Appointed a QC in 1961, Hutchinson gained a reputation for taking on high-profile clients. He represented Christine Keeler during her trial for perjury following the scandal of the Profumo Affair in 1963. He also appeared for the Great Train robber, Charles Wilson, and for the Soviet spy George Blake.

He defended the drug smuggler Howard Marks, “he was great fun”, and also the journalist Duncan Campbell in the 1978 trial following the leaking of official secrets from GCHQ, in which Lord Hutchinson first exposed the practice of jury vetting.

Lord Hutchinson sat for ten years from 1961 as the last Recorder of Bath and helped to found the Criminal Bar Association. He loved cricket, walking and art. He served as Deputy Chairman of the Arts Council and, from 1981-84, as Chairman of the Trustees of the Tate. It was Hutchinson who paved the way for the building of the Clore Gallery to house Turner’s work, as well as for the creation of Tate Liverpool.

Lord Hutchinson’s success was based on a mixture of self-confidence and great legal acumen coupled with his strongly held opposition to the small-minded Establishment. His greatest gift was his genuine empathy with many of the men and women he defended. “My colleagues used to say, ‘Hutchinson, you adore your clients.’ But it was hard not to. You meet such extraordinary people. They were rather lovable.”

Lord Hutchinson was created a Labour peer in 1978 and retired from the Lords in 2011, although he continued to speak out against the spectre of political interference with the judiciary. In 2015 he turned 100. Fellow lawyer, Sir Alan Moses called Lord Hutchinson “a hero for us all. He is the living symbol of all that independent criminal advocacy means for justice and the survival of the rule of law.”