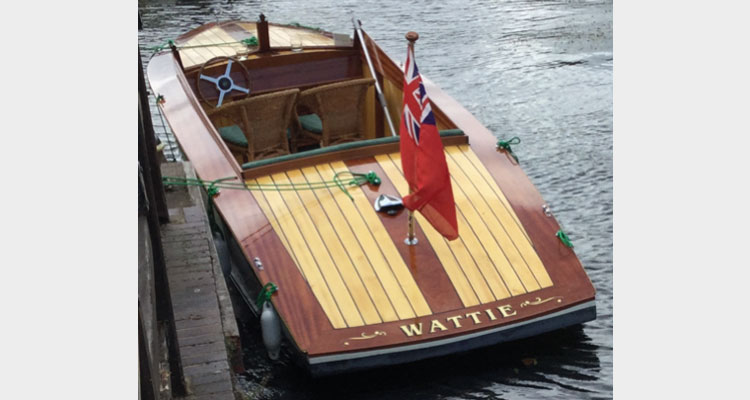 David writes, “My father, Ralph Watson (Chandos 29), has always laid claim to my interest in making things. His stories included my habit at the age of three of hammering nails into electric sockets and so, to prolong my life, he made a place for me in the farm workshop. I was full of enthusiasm to join the woodworking class when I started at Stowe in 1955 but I was a typical lazy Stoic and took too long to enter my name, by which time the class was full and I joined the metal working shop instead. My first project was a steam engine, which initially worked beautifully until the boiler blew up. Unfortunately, a young Stoic, Marr, was eyeing my handiwork closely at the time as the engine took off from the bench like a steam rocket and hit him squarely on the side of the head, knocking him out cold. You will be glad to hear a day or two in the San allowed a complete recovery. Chandos was a hotbed of aviation freaks in the late 50s. Robin d’Erlanger (Chandos 62) had an aviation background and flew successfully. He was famous for ditching his ’plane in The Channel due to engine failure but was photographed stepping off his wing into a boat without getting his feet wet. A fortunate but skilful escape. Tom Storey (Chandos 61) has had a well acclaimed history in aviation since leaving Stowe and has built several ’planes himself. I did not claim an interest in flying until later but having gained my wings I soon learnt that you could build something faster and more comfortable than anything on the open market. Over regulation led to a lack of advancement from the likes of Mr Piper and home builds were allowed to bristle with modern avionics and sleek shapes made in fibreglass. My wife, Helen, often boasts of her first day of marriage when a 30 foot box arrived outside our mews house in South Kensington containing the parts for a thirty foot wing span Glasair kit from America. Three years later, and three thousand hours labour, GIIRG was completed with interest from the BBC and ITV, both of which filmed short programmes as the ’plane neared completion. I was honoured with a cup for the best home build from Pilot Magazine in 1994 at the annual aircraft show at Cranfield. Several years later, I completed a Vans RV 7 from my home in Goodwood, GIIRV. Unfortunately, my ticker intervened with a loss of my flying medical and I returned with enthusiasm to boating. I had been introduced to boating on the Thames in 1959 by Anthony Mash (Chandos 58), who had, and still has, a Thames slipper launch. The slipper is a wooden boat of great beauty, with which I fell in love one Stowe summer holiday. This was the inspiration for my last project (see photo).”