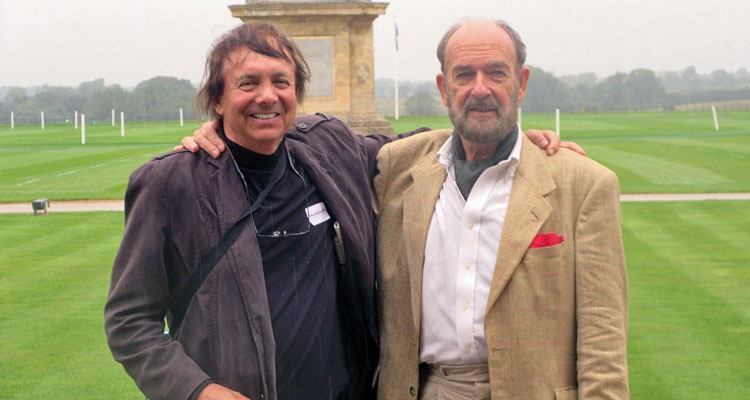 David writes, “I arrived on Monday 18 September in Buckingham, where I found a taxi to take me to Stowe. The chatty driver took me up the tree-lined avenues until the turn into the North Front, where we were stopped by a gateman who had been told to expect us, and gave us a friendly welcome. Walking up the steps of the North Front portico, I was glad not to see changes to the House, its sweeping colonnades, the lawns, roadways and equine statue of King George II. However, on entering the Hall I noticed that the large, framed paintings of Sir Richard Grenville and his wife, which were such a grand welcome to me as a new boy more than fifty years ago, had disappeared. Several smaller paintings of the family who created Stowe now hung on the walls, and I wondered why… At the Reception Office I learned that Peter Schneider (Lyttelton 68), my Old Stoic friend, whom I had arranged to meet, was awaiting me downstairs in the new visitors’ area, which during my first term had been the Chandos Dining Room. Two helpful ladies met me, brought me to Peter, whose greeting was as cheerful as always, and told us the schedule for our House tour. Soon our group of about eight was led to the Egyptian Entrance, off Plug Street, which boys used to call the long, stone-floored corridor beneath the House. I remembered how, if we wanted to use the toilets during class, we would ask ‘May I go to Egypt, sir?’… for in the early days of the School, the bathrooms were near that entry. Instead, our guide told us about the Temple family’s pretensions to antiquity. We continued upstairs to learn more about the Temple family. Our guide taught me many things I did not know, but seemed keen to say what was amusing, rather than historical. This often happens at guided tours of great houses, which is a pity, for visitors are often serious about learning the importance of a place. We continued towards the Library, where we were asked not to disturb any pupils at work, then to the Bruce and Temple Common Rooms and the Marble Saloon. I took many photographs, except in the Library, and was glad to see familiar old paintings of the Dukes and their family in their huge, golden frames on the walls of the House’s principal rooms. In my days at Stowe some paintings in the Dining Room had been damaged, perhaps by pats of flicked butter or thrown cutlery, but these had been restored; Public School adolescence vanished. After the tour, I asked if I may see Chandos House, which Caroline Whitlock quickly arranged. Leading us, we walked down the corridors, old photos hanging on the walls, into the heart of my life at Stowe. The Chandos Common Room, now bearing a brass plaque inscribed The Paris Room, is nicely restored, with the names of old Chandosians carved into wooden boards on the head wall. My father’s name in black – for he had been a School Monitor – is in the class of 1930, and my uncle in the class of ‘32. Mine is in the outside hall, class of ‘68. In my day, the Chandos Common Room was a dormitory, where I spent a year. Boys are adventurous, and we soon found a small section of the room’s wall, beneath the chair rail, that one could pull open to reveal a narrow passage with ladder-like steps leading upwards. The passage was dark and I did not venture far, as I knew that some boy might think it funny to slam the door shut… old English houses sometimes contain the ghosts of those buried alive. When Stowe was home of the Temple family, this Common Room also had been a bedroom, a natural place from which a secret passageway could provide escape in an emergency. After all, it was only a hundred years since the end of the civil war and execution of King Charles. The Temples were a powerful Whig family, not the monarch’s favourites, and they doubtless had enemies. This passageway was, in fact, one of three that gave the family some sense of security. Another secret passage leads from the Library, at the far end of the upper level of books. The small doorway is not noticeable, for it looks like more old books on shelves but if one pulls out a book, the door opens to the passage behind. I did not go far into this corridor either, for a watchful librarian was always on duty. I don’t know where Stowe’s third secret passageway is, as I only heard about it. I also heard that these secret doors led to an underground passageway from the House down to the Eleven Acre Lake, exiting beneath the waterfall that drains it. I did investigate this, climbing behind the falling water, up into an arched tunnel that seemed to pass under the Lake but I did not get far, as the dark, dank corridor had been bricked up. Perhaps Stoics had used it to escape School. My visit to Stowe and Chandos brought me the joy of old friendship and fond memories. It is heart-warming to know that the old place is thriving.