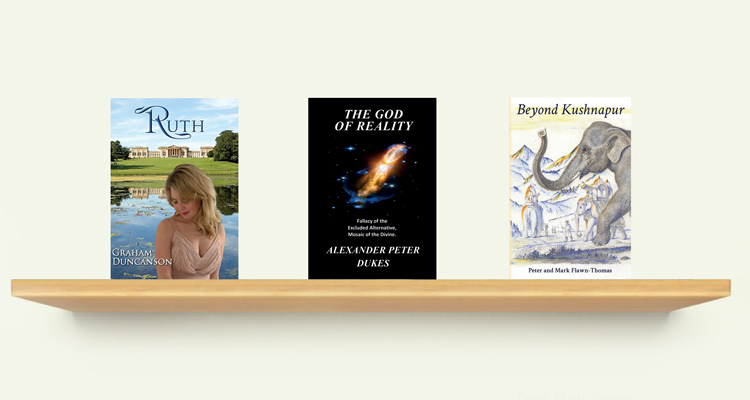 Graham’s latest novel, Ruth, has recently been published as a kindle edition.

Graham writes, “I have just published a novel called Ruth. The heroine saves her future husband’s life after the Battle of Waterloo. There is a large amount of poetic license but she comes to live at Stowe. It is a rags to riches romance. Ruth, the heroine, was the daughter of a whore attached to The Duke of Wellington’s Peninsular Army. She thinks that she was born in 1800. She hardly remembers her mother who died when she was only five years old. She follows the British Army to Waterloo where she steals a horse and rescues a young, blinded, cavalry officer, who actually is Lord Chandos. They fall in love and with her help they arrive at his country seat, ‘Stowe’. She bears him ten children who all play major roles in the story. Her mission is to help him to regain his sight.”

The God of Reality: Fallacy of the Excluded Alternative, Mosaic of the Devine by Alexander Peter Dukes (Walpole 64)

Alexander writes “God gets a very bad press nowadays. He doesn’t exist. So why should we believe in him, or that he does? Or engage in endless arguments for or against the existence of the God of Tradition?

All too often, religion gets an even worse press. Whatever good it does, religion is the cause of so much conflict and suffering. Surely, the world would be better off without it. Or at least, while retaining its best features, with a more mature, modern replacement.

Everything created by human beings can be used for good purposes or for bad purposes; or in a good or bad way; including all ideas, religions and their practice. So why not focus on the positive or on turning the negative into the positive and find the godly, divine and spiritual not only in our environment (like the grounds of Stowe) but also in our hearts and minds? Even without any conventional faith, they are there for us to choose; to give life a magical, yet real, dimension. For truth be told, the magical is part of reality. Look at the stars and nature, listen to music or admire a myriad amazing human achievements. Nothing supernatural, yet super and natural.

Written almost entirely in the form of aphorisms (of which many are on Internet view at Alexander’s Aphorisms) the above is exactly what my book, The God of Reality attempts to identify and encourage.”

Mark has written a novel, called Beyond Kushnapur with his father, Peter, who sadly died in 2015. The novel was published on what would have been Peter’s 100th birthday, 2 September 2019.

Against the turbulent backdrop of war torn Europe and India in the final days of the Raj, Adam Cullworthy, a British Army Officer, is introduced to the romantic and often treacherous life of his school friend Rindi Debrahm.

The story, which spans 30 years from 1928 to 1959, opens at Kushnapur Palace in the foothills of the Himalayas. Home to Rindi’s father the Maharajah of Kushnapur, it holds secrets of family conspiracy, religious conflict and a multi-layered web of intrigue surrounding a precious, bejewelled Indian sculpture.

Adam is drawn into this exotic and secretive world, but could never have imagined the role they had planned for him and the profound effect this would have on his life.