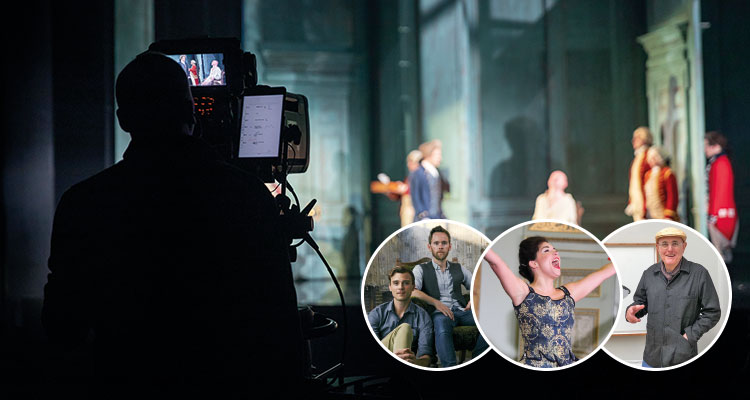 2018 has been the year we launched NTLive at Stowe. With performances of King Lear, Anthony and Cleopatra, plus a new adaption of Strindberg’s Miss Julie and Alan Bennetts Allelujah! We have brought the best of British Theatre to the Roxy Screen in Roxburgh Hall. Streamed live from the National Theatre and other venues such as the Almeida, we look forward to more productions of Shakespeare classics and plays by brilliant contemporary writers such as Alan Bennett and David Hare. In May, we are very excited to have a special screening of Arthur Miller’s All My Sons with Sally Field and Bill Pullman, streamed live from the Old Vic on its 200th Anniversary.

2018 was also the year that Arts at Stowe worked with the School and pupils to raise money for various charities through the events and concerts. Rory Bremner raised thousands of pounds for the Leonard Cheshire Disability and TUSK, whilst a series of events throughout the year including SOUTHSIDE 18, our eve of Speech Day concert raised a substantial amount for the Charity and raised the pupils’ awareness of one of our finest Old Stoics. We also raised money for Young Carers in Buckingham and Winslow and subsidised their participation in projects.

The public audiences for our wonderful lunchtime concerts by Music Scholars continue to grow and the piano concert with one of our rising stars, David Choo (Chatham, Upper Sixth) was received with great admiration from our members. We are looking forward to a programme of brilliant vocal concerts in the Spring and following on from this year’s stunning Concerto Concert, the Music Department is preparing to astound audiences with the Stowe Symphony Orchestra featuring soloist, Jeffrey Au (Walpole, Lower Sixth), one of Stowe’s finest young pianists. Another highlight this Spring will be Our Director of Music, Craig Greene (Chandos 07) giving his first concert in the Ugland Auditorium since joining us in September 2018.

Once again, we honoured the memory of Sir Nicholas Winton (Grenville 27) at our Holocaust Memorial Event: Torn From Home in January. It was a very special evening, highlighting the efforts of current Stoics in response to the plight of the Rohingya people.

From Folk duo and multi award winners Ninebarrow, our own BEN² to Björn Again, we have a brilliant variety of music this year. The Fingask Follies return for fun and frolics in the State Rooms in May.

Yes, Björn Again are coming to Stowe for SOUTHSIDE19, our Speech Day Eve Concert. The South front will come alive on the evening of the 24 May with the sounds of Abba, glorious picnics and much dancing.

This Autumn, RA artist David Mach was interviewed about his creative process, life and works. Next Spring will see another RA artist, Humphrey Ocean, give a talk on perspective and portrait.

Summer sees the return of Stowe Creative Academy bringing back the hugely popular Musical Theatre Week, Rock and Pop School, Story Telling Week and Chamber Music Course plus an international Piano School, which will continue to fill the buildings with creativity over the summer. Florence Academy returns to take over the Queen’s Temple with its incredibly popular Portrait and Landscape masterclasses.

Our Opera programming continues to grow and we are overjoyed to have the Opera Babes back at the Arcadian Opera Gala in May and very much look forward to their Romeo and Juliet in the Autumn following the sell-out success of The Wreckers this year.

As well as NTLive we had ghost stories with Shivers in February, a whole host of children’s theatre productions, the Right Royal Draw Along with artist Nick Sharatt, plus magicians Morgan and West bringing their new Science and Magic show in the Autumn. Summer will see the open air performance of Much Ado about Nothing and The Tempest with both the boy and girl troupes of Handlebards against the grand backdrop of the Grecian Valley or South Front and as their stage, but hold on to your picnics as they have been known to incorporate the odd pie or glass of fizz in the performance.

Arts at Stowe membership has grown rapidly to over 300 paid members and attendance to all our Stoic performances and various events continues to impress with some wonderful feedback. As an Old Stoic or parent you automatically become an Arts at Stowe member. For any enquires about events, please email us at thearts@stowe.co.uk or call us on 01280 818012.

We look forward to welcoming you to one of our events in 2019.

The Arts at Stowe Team