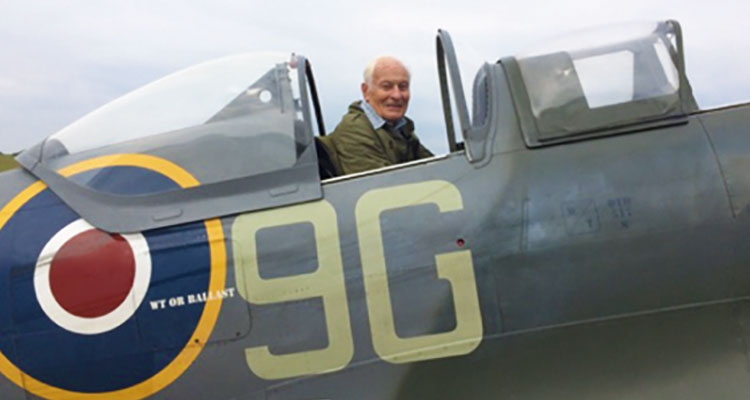 Anthony writes, “Way back in the 1960s and 70s, both my wife, Mo, and I had flying licences while out in the Far East. When I married her in 1960 I said, ‘If you are marrying a Sparrow you had better learn to fly’, and she did! This year, my 80th birthday arrived and, totally unbeknown to me, the family had organised a flight in a Spitfire at Biggin Hill. Mo, Caroline and Jeremy (two of our children, both Old Stoics) and I went to Biggin Hill for the flight. After kitting me out, we learnt that a 95 year old ex-Luftwaffe pilot (with 80 Russian kills to his name) was also there for a flight as a guest of the BBC. So when we took off, the BBC camera crew came up as well and flew alongside us and filmed us doing some basic aerobatics. When we watched the 6 o’clock news that evening, we discovered they had included film of our aerobatics to spice up the film of the old German’s flight! He had only wanted a straight and level flight. I was then given the controls of this beautiful Mk9 Spitfire, which I flew over towards London and, eventually, back over Sevenoaks. We finally did a Victory Roll before landing back at Biggin Hill. What a fantastic experience in such a perfect flying machine.”