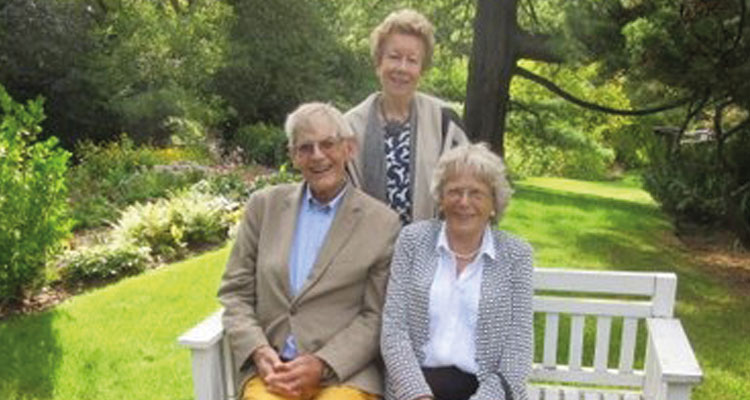 Michael writes, “On 4 August 2017 the ‘Cobham Four’, Ridley ma., Charlton, Trevor and Fincham, who were crammed into a study together for one term in the summer of 1955, met for lunch in more spacious surroundings near Newbury. The Faithful Four, the wives who now nurse them, were present as well. Unfortunately, none of the men have ever learned to keep their voices down and it is hoped that the remainder of those lunching enjoyed the conversation, as they certainly heard it. On 13 September 2017, Rosemary Murray, widow of Nigel (Cobham 56), accompanied Michael Ridley on the Eurostar to Brussels where they were entertained to lunch by Nigel Williamson (Cobham 56) and his wife Catlyne (standing behind). Nigel has had many health problems but these did not prevent him from walking with us round the gardens of the van Buuren House. We had a very good day.”