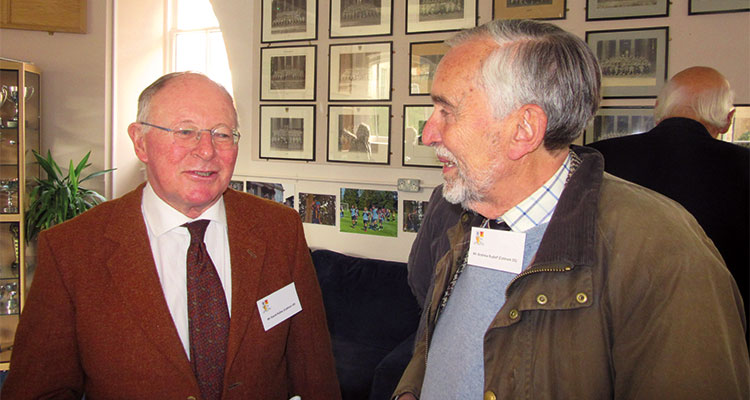 Michael writes, “All those bored by the gatherings of Old Cobhamites of the mid-fifties (who are now in their early-eighties) look away now. For the faithful few: this one, Michael Ridley, was generously entertained to lunch by David Johnson (Cobham 56) at his club on Piccadilly last summer. David would qualify for an entry under the successful business section, having left his family firm in the Potteries and built up one of his own, making specialist china for the catering trade. In August, Nigel Williamson (Cobham 56) came over with his wife from Belgium and stayed for a couple of nights with Rosemary, Nigel Murray’s (Cobham 62) widow at her pretty house a few miles from Stratford-upon-Avon. I joined them overnight and we had a very amiable evening starting with champagne in Rosemary’s garden and dining at an excellent local and rather superior pub. Both of Nigel’s brothers have now died.

The following month the Gang of Four who had once shared a study, Fincham, Charlton, Trevor and myself, raised the usual standard of reunion venue by staying in Plumber Manor near Sturminster Newton overnight. Faithful and ever youthful wives kindly accompanied us. Warned of the possibility of ribald laughter the hotel thoughtfully siphoned us off into a private room and served as good a dinner as I have ever had – hotel recommended. We had lunch in Roger’s large farmhouse kitchen nearby the next day. My brother, David, was paying a visit to England around then, and we were able to go together to the Cobham lunch generously laid on at Stowe on 7 October 2018. The catalyst for the event was the viewing of the new Cobham and a last look at the old. The layout of the old house had changed so much since the fifties that not much of it was recognisable and our old studies had been absorbed into Grafton. The Houseroom was a constant, but I think we felt we could view it for the last time without too much regret. The new building looked like the epitome of luxury living. It was a great pleasure to see so many including Francis Madden (Cobham 56) (who had read some earlier entries and was glad to have news); Dick Squires (Cobham 56); Michael Orlebar (Cobham 56); Anthony White (Cobham 58); Michael Fraser-Allen (Cobham 54); Dennis Paravicini (Cobham 49) (from an earlier generation); and a very particular friend and former study mate Andrew Rudolf (Cobham 55). There were many others who, as they say in parish magazines, were too numerous to mention. A very good day and many thanks to Stowe.”