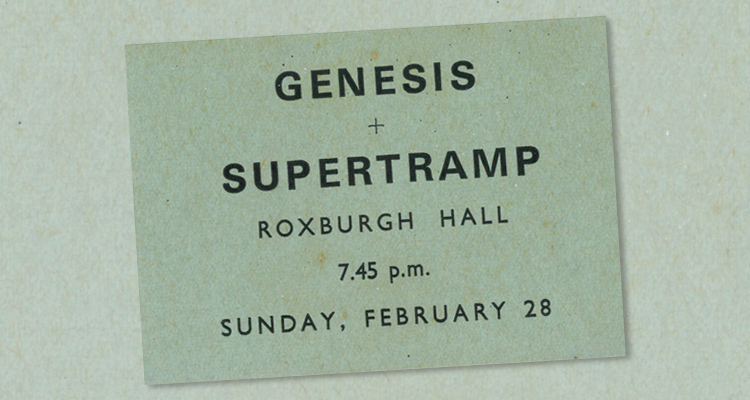 Memories of Supertramp & Genesis at Stowe 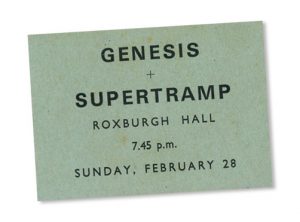 It was a cold, wet Sunday evening and I remember having the usual Sunday night baked beans in the Dining Room. On the table next to me were musicians in their Afghan coats, beads and long hair, about to perform in the Roxburgh Hall. Tickets were issued to this concert and, to this day, I have always kept hold of mine.

The Concert featured Supertramp and Genesis. Both bands had recently formed. What none of us Stowe boys knew at that time was that many of the founders of these bands would go on to become world famous. In Genesis there was Peter Gabriel, Mike Rutherford and Phil Collins – Phil Collins went on to become the most famous of all, performing solo all around the world. In Supertramp there was Rick Davies and of course Roger Hodgson (Grenville 68), who had recently just left Stowe, he was the one who powered Supertramp to becoming one of the most popular rock bands of the 1980s and 1990s. Roger is still performing these songs from the Supertramp albums to audiences around the world.

In 1971, Supertramp had just released their first album, Supertramp, 8 months earlier. Genesis had recently released Trespass, to which many of us had been listening. The Concert featured Supertramp performing first and included some of their songs from Indelibly Stamped, which was to be released 5 months later. When Genesis came on stage they played all our favourite songs from Trespass, which included Looking For Someone, Visions of Angels and Dusk and then ended on the one we all like best, The Knife. While singing this song, Peter Gabriel got so fired up he put his foot through one of his speakers.

I was only 15 at the time but that evening is one that I have never forgotten and, even though it was just a cardboard ticket, for some reason I hung on to it until this day, almost 50 years later.