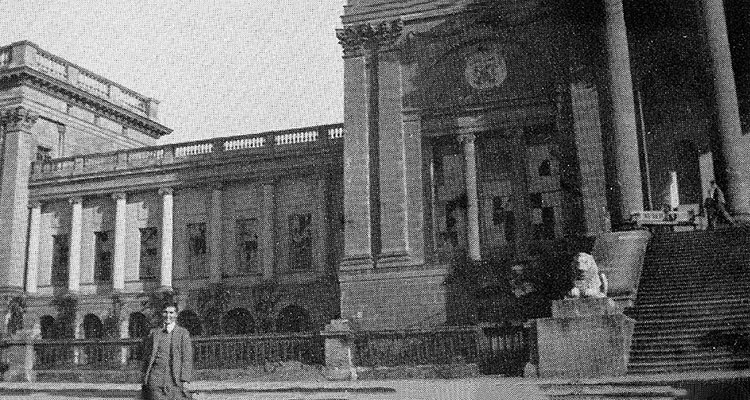 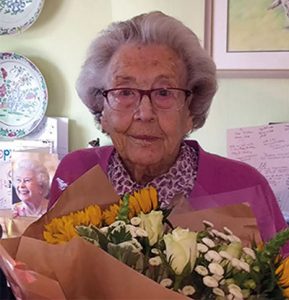 Liz, who is now 101, has been part of the Stowe community for over eighty years. She worked at Stowe from 1938 – 1942, met and married a Stowe Master, Ewald Zettl (Former Staff 1935 – 1966). She has kindly shared some of her memories from her time at Stowe, focused around the outbreak of the Second World War, in light of this year marking the 80th anniversary of the outbreak of WWII.

“A long-standing friend, Mary Westbook, recommended that I apply for the role of Bursar’s Secretary at Stowe in 1938. I travelled from my home near Staines for the interview and met the Bursar, Major Russell. Apparently, the other applicants were a great deal older than I was and Major Russell felt they would boss him. I was only 20, so Major Russell thought he would be able to boss me instead! Mary had recommended me to him, so he offered me the job. I was simply delighted.

I was given a lovely flat overlooking the Gibbs Block and worked Monday – Saturday in the Bursar’s Office, which, at the time, looked out towards Walpole. I was in a room with Harry Garratt, the School Accountant who remembered Stowe as a private house, and Major Russell had an adjoining office. I was one of very few female members of staff at the time.

I had been in position for six months on my 21st birthday and received a pile of gold telegrams. JF Roxburgh, the Headmaster, happened to come into the Bursar’s Office. It was a few days into the beginning of term, so he was incredibly busy. He noticed the telegrams and offered his congratulations for my birthday. I informed him it was my 21st and he then reappeared later in the day with a bottle of champagne. He was so kind; it was typical of his wonderful character that he made such an effort to wish me well on my birthday. To me he was God on earth, he lit up the room when he entered it and was a real presence.

When the War broke out in 1939, Major Russell volunteered, along with three men who worked the North Hall Switchboard and Reception. The new Bursar was not to my taste, so I was asked to move to the Switchboard. I managed the North Hall Reception, with the help of two younger people. We worked long hours, from 8am until 10pm in split shifts but I absolutely loved it and much preferred being in Reception to the Bursary. We were able to meet everyone and see so much of what was going on in the School, even watching some of the rugger matches out of the window.

All of the staff and Stoics had to help secure Stowe for potential air raids. The Stoics dug shelters on the South Front and the staff were allocated various jobs around the School. I met my husband Ewald, when we were asked to split into groups to stick tape on to the windows in the State Rooms. It was lucky we did that job because when the bombs fell on the South Front, it blew out all of the glass, so the tape really helped with the clean-up effort. It looked absolutely awful, as though the House had been burnt out, there wasn’t a window left intact.

I remember the air raid well, it was about 10pm at night and I went straight to North Hall to help with the switchboard as soon as we could. JF was very pleased we were there helping. It was very fortunate that the bombs missed the House – the blackout worked well but we couldn’t black out water, perhaps we ought to have drained the lakes.

There was one other bomb that fell in the grounds, it is always forgotten about. It hit farmer Davis’ shed on the North Front, which had brand new machinery outside. It ended up on top of the shed!

We were lucky they didn’t get the whole school, it is such a beautiful building. I would have thought public schools were a prime target because they were turning out future Officers.

Unfortunately, in 1942 I was called up to help with the War effort. I was sent to be trained in Oxford before being dispatched to High Wycombe to help with secretarial duties in a goods outwards factory – it was deadly boring and I’d much rather have stayed at Stowe. The people were nice at least. I travelled back to Stowe every other weekend to see Ewald. I had a boring but easy war.

Ewald had only just received his British National status at the outbreak of the War, so he was not called up and was able to stay at Stowe throughout the War. We married in 1947 and lived in a school house in Dadford until Ewald retired in the 1960s, when we bought our house in Buckingham.

We used to have JF for dinner a few days before the start of each new term. The Housemasters’ wives used to think I was very brave for doing so but it really was a pleasure. We liked him very much and enjoyed his company. He was very Edwardian and always dressed immaculately. He called us by our first names but I always called him Mr Roxburgh and Ewald called him Sir.

Roxburgh really was not the same after the War, losing so many of his old boys destroyed him. He was a real dear and really did make Stowe what it is today.”