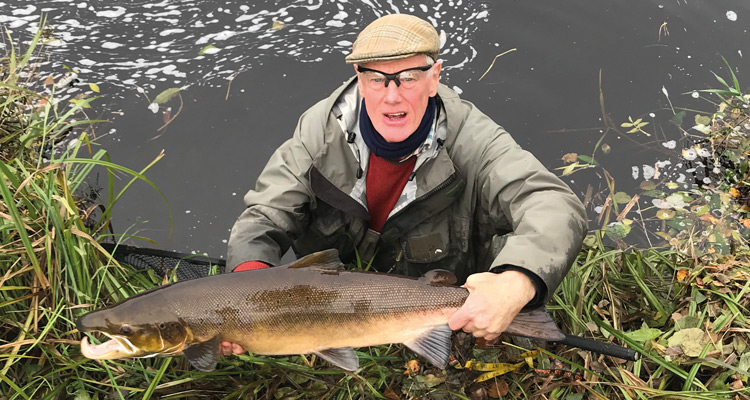 Graham writes, “I am a keen fisherman and I have had a brilliant year’s salmon fishing, having caught 22 salmon in total in the UK last summer/autumn. I doubt I will ever have such a great season again! This is what I recently submitted to my fishing club to try to win the largest salmon and best story prizes! So, here goes: 1. The 20lb Rede salmon. There were low overhanging branches on the other side of the river but I could see that there was some nice holding water, so I was casting low across the water to cover the far side, a bit like a cricket sweep shot, and was rewarded when a fish took my fly. I then played the fish, which stayed deep but swam strongly up and down the river over a long period of time. I could feel that it was a heavy fish but I had no idea that it was that heavy. I was hard on it whenever it tried to go down river because that would have taken it into an enormous pool on the Tyne and it would almost certainly have caught the current and gone down river. As I was on the wrong side of the Rede there was no way that I could have followed it down. Anyway eventually the fish started to tire and I caught glimpses of what looked like a monster fish! How to land it was now my challenge. There was a high bank behind me so I couldn’t beach the fish where I was and there were overhanging branches further up the river meaning I couldn’t beach it upriver because my rod would have caught in the branches. So, I removed the net from my back and promptly dropped it in the water resulting in a rather wet arm as I retrieved it just before it got swept down the river on the current. How to get the fish into the net! I was shouting loudly for the other fisherman, Chris but I think he was a bit deaf because he never appeared. The salmon was still very strong and had no intention of coming to the surface so I had to make a couple of underwater scoops at the fish, both of which energised the salmon. My efforts were not helped by the fact that too much of my reeled-in line had accumulated in the middle of the reel pressing against the top of the reel meaning I couldn’t get any more line on the reel at that stage of the battle. However, suddenly I had him at an angle and his head came to the surface at which point I found myself staring at his enormous kype – but I was able to steer him into my net. He was too big for the net but salmon are of course supple creatures and his body bent helpfully as I raised the net. Got him! 25 to 30 minutes had passed but now what? I was standing in the river with a great bank behind me so I cut the line, threw my rod up onto the bank and somehow managed to scramble up the bank with one hand while holding onto what was now a very heavy net with the other. I attracted Chris attention who came running over and I then slid back into the river, but now on the Tyne side, so that I could get the salmon back into some water. I then extracted the hook, rescued the fly and posed triumphantly for the camera. I then released the salmon back into the water. He swam away strongly, no doubt hoping not to meet me again! I then scrutinised my equipment and discovered that my running line had pretty much disintegrated under the pressure of handling this big fish.”