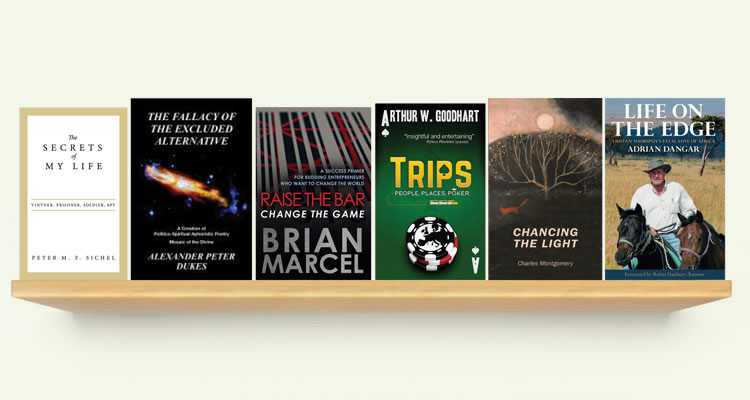 The Secrets of my Life, Vintner, Prisoner, Soldier, Spy by Peter Sichel (Cobham 41)

Peter, a fourth-generation wine merchant, found the path he was destined to walk interrupted by the Nazis while growing up as a Jew in Germany. He moved to France in 1939 but was imprisoned as an enemy alien at the outbreak of World War II. When he was released, he hid in the Pyrenees before reaching the United States in 1941.

After joining the Army, he served with the US Office of Strategic Services, sending spies into Germany, before becoming a senior official with the Central Intelligence Agency, where he served in key positions in Berlin, Hong Kong and Washington.

In this memoir—which needed to be cleared by the CIA—he describes how the Nazis took over Germany, the odd attitude of German Jews to being Jewish, the fault lines in US intelligence during the Cold War, and the life lessons he learned in the wine business.

In recognition of the global reach of religion, which is part of the human condition, and so endeavouring to make a contribution to modernising, or bringing religion up to date, this is a book about God – not a supernatural God, nevertheless, a God that is both super and natural – in fact, the God of Reality, relevant for the future as well as today.  For which purpose, rather than participating in the endless arguments for or against the existence of the God of Tradition, it is a book that highlights the divine and the godly in many areas of human activity.

Alexander’s book is available to buy on Amazon and via online bookshops.

Chancing the Light is a collection of poetry bringing together work published by Charles over the years in a variety of journals and magazines. The early pieces were written during his time at medical school and more recent work draws from the lives of people he encountered during his career as a  Consultant Psychiatrist.

There are themes of time and loss, healing and moments of contact and there are poems inspired by the wild and empty places of the world. Charles writes, “I am sure those formative years I was fortunate enough to experience immersed in the beauty of Stowe, instilled an early awareness of the mystery at our transient place on this earth that lies at the heart of this collection.”

Adrian has penned a biography on the life of his friend and former Stowe Parent, Tristan Voorspuy.

Once described by the actress, Joanna Lumley, as ‘the man with no fear’, Tristan Voorspuy spent his whole life living up to the legend. Early stints in Northern Ireland and Germany with the Blues and Royals regiment were but a precursor to a life defined by his love of Africa, a life cut tragically short in 2017 on his beloved Sosian.

From his epic motorbike ride from Cairo to Cape Town, to extraordinary wildlife encounters and many death-defying light aircraft near misses, Life On The Edge paints a picture of a man determined to live life to the full. It is also the story of compassion, conservation and, ultimately, tragedy.

In the last two decades of his life, Voorspuy transformed the overgrazed and drought-blighted Sosian Ranch in Northern Kenya into a celebrated game reserve, acclaimed tourist destination and successful cattle ranch.

True to form, it was whilst defending this property that an unarmed Tristan, on horseback, was gunned down and killed, a murder that sent shockwaves around the world.

Raise the Bar, Change the Game by Brian Marcel (Chatham 63)

Raise the Bar, Change the Game is the beautifully written story of an entrepreneur. Rarely do you have a biography where personal humanity is intricately interwoven with the business successes and failures that occur when someone takes a road never before travelled; in this case, through the newly-fallen Soviet Union.

The rapid collapse of the Soviet Union hit all of Eastern Europe like the meteor that killed the dinosaurs. Brian quotes Darwin, “It is not the strongest of the species that survives, nor the most intelligent; it is the one that is most adaptable to change.” No one in Eastern Europe had a Plan B for a capitalist economy after the fall of Communism and the end of Russian domination. Brian was tenacious. He saw that success lay in constant adaptation and in coping with the old Communist mentality, while helping create a new business environment. Business became a series of transient opportunities. It was about market creation, not market fulfilment–not an easy task because business conditions were different in every city-state in Eastern Europe.

This is a great book for someone who wants to be a pathfinder, a disruptor, or a change agent – not just another suit in an established firm. This book is about marketing high tech and market creation. It shares the accumulated wisdom of a true pioneer with the ease of a campfire story.

Brian got involved in the early days of barcoding and soon started his own business selling artwork used for printing barcodes on products. The business expanded, and after the fall of the Berlin Wall in 1989, he set up joint ventures in five of the former Eastern Bloc countries. They are still great success stories in their own right. Brian was recently married to his new wife, Lisa. He has a daughter, Jessica, whom he adopted from Romania. They all live in London. Raise the Bar, Change the Game is his first book.

Trips records visits to Deauville, Prague and Nottingham to play in big buy-in poker tournaments. A book about playing poker, chasing dreams, embracing failure, confronting obsession, growing old, the anarchy of luck. An elegant celebration of a game that enthrals millions, enriches some, educates others.

Poker is easy to learn, difficult to master, a game of skill that incorporates enough luck to give anyone hope and justify dreams. Exploding in popularity early in the new millennium, a predominantly American game became a worldwide phenomenon. The Main Event at The World Series of Poker regularly generates one of the year’s largest sporting prizes. In 2018, the winner took home $8.8 million.

Arthur writes, “I try to envisage a life without poker, coffee or red wine and find I cannot. To date, being an obsessive, if that is what I am, has brought more pleasure than pain. I know that to sip a glass of decent wine and envisage winning a big poker tournament, any tournament, will also brand me a fantasist, but what is a life without dreams?”

Arthur W. Goodhart served in the British army before attending Williams College, USA and Oxford University. He worked in publishing prior to starting his own literary agency. After thirty years he switched again from agent to author. He lives in London. He has also published a novel, Unlucky, as well as two Kindle Singles.

For further information about book or author please contact thegatepress@btinternet.com

From Morality to Mayhem: the Fall and Rise of the English School Story by Julian Lovelock (Former staff, 1975–1978)

More than a hundred guests gathered in the Music Room and Marble Hall on 5 October 2018 to launch From Morality to Mayhem: the Fall and Rise of the English School Story by Julian Lovelock (Former staff, 1975–1978). The launch was hosted by Stowe’s Headmaster, Dr Anthony Wallersteiner, who spoke about the changes in schools over recent years.

Julian taught English at Stowe from 1975 to 1978. He then moved to neighbouring Akeley Wood School, where he was Headmaster for twenty-six years. Picking up on the theme of change, he recalled that Stowe was a very different school in the 1970s. “But then, as now, there were few more magical schools in the country in which to teach and learn,” he said. “In fact, in the book I suggest that in its liberal spirit Stowe is the real heir of Dr Arnold’s Rugby, and certainly no school is more fortunate in its setting.”

The book, which is aimed at both students and the general reader, casts a nostalgic eye over the many school stories written for boys and girls in the nineteenth and twentieth centuries. However, it finds just as much enjoyment and more enlightenment in the magic and mayhem of more recent novels like the Harry Potter and Worst Witch series.

During the launch, Julian told guests how he had come to write the book and how today education should be more about inspiring young people and less about examination results and league tables.

He added, “After a whole career working in education, from reception class to university, it was almost inevitable that I would want to write about schools, or at least about their stories. I was delighted that so many people, including former colleagues and students, came along to give it such an amazing send-off.”